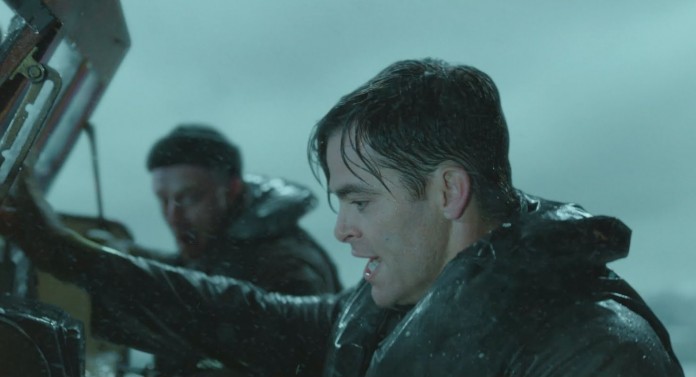 Craig Gillespie’s latest picture, The Finest Hours – is a wannabe sea-faring epic has some grand ideas and a lot to get your sea legs going, but feels desperately hampered by a lack of creativity.

A massive storm hits the Massachusetts coast line and conditions at sea are ferociously unforgiving. A huge tanker is caught up in the waves unable to make shore. Instead as conditions worsen, the ship splits in two with one half immediately sinking killing most of the crew. In the ailing half that remains afloat, engineer Ray Sybert (Casey Affleck) is forced to take charge.

News of the disaster reached the coast guard and Chief Warrant Officer Daniel Cluff (Eric Bana) scrambles a rescue boat to try and help the survivors. The tiny vessel, dwarfed by the giant waves around it, is captained by Bernie Webber (Chris Pine) and crewed by three other sailors. Waiting on dry land is Webber’s fiancée (Holliday Granger), who is about to go through a night that will test her ability to cope with seeing her intended risk his life for strangers.

The incident around which this film is based is a storm that occurred in 1958. The period is wonderfully recreated in a stuttering but heartfelt romance between Grainger and Pine. Their tentative steps towards one another, and the general tone by the script feel believable and engaging.

Both Pine and Grainger look like they stepped out of a 1950’s set. They suit the period, the clothing and the styles with their impossible-to-miss attractiveness. The film can’t really focus on this for long enough though, as its sold on the basis of this daring rescue we just have to get to sooner rather than later.

In the other portion of the opening we get to see Affleck struggle to maintain order when the storm destroys the ship he is on. The mind-boggling sight of the sheered tanker helplessly bobbing along is a highlight, but the humdrum drama and tests on the ship itself are predictable.

Bana plays a needlessly aggressive superior who lacks compassion. It would probably serve more of a purpose if this character was the villain of the film, or even if he had a redemptive moment to speak of, but he doesn’t. He comes across as an irritant man wilfully sending young men to their deaths.

The film remains afloat thanks to the stoic faces of those on board the tiny boat sent on the rescue mission. As Grainger waits for her man to come back, Pine rarely says anything apart from the odd command to his charges. The more you discover about the mission to hand, the more you realise there is validity in the pessimism on display from the likes of Ben Foster.

The idea behind this film is clearly to invoke the awe of the spectacle and the emotion of the romance. Unfortunately both these elements are lacking in some way. Grainger dutifully does her role, as underwritten as it is, but the heart of the movie belongs to the first act not the final one. As for the visual effect, they are convincing without ever fully capturing the intensity and danger required.

Ben Foster stars in trailer for Barry Levinson’s ‘The Survivor’