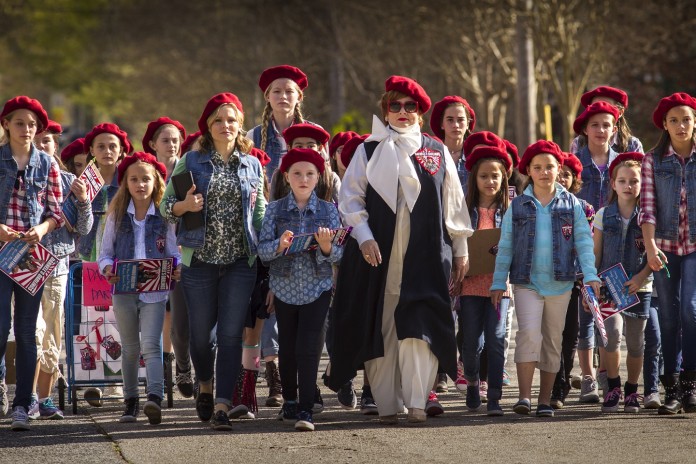 Written and directed by Ben Falcone, with a little help from fellow Groundlings alumni, Steve Mallory; The Boss?follows Melissa McCarthy’s Michelle Darnell – a brash and successful businesswoman arrested for insider trading – as she embarks on her comeback trail. Eager to make amends for her crimes, and obnoxious ways, she wades through the ashes of burnt bridges and sets off on the road to redemption, teaming up with her former assistant, Claire – played by Kristen Bell – to rebuild her life and career.

That the movie is reported to have been originally titled?Michelle Darnell?- putting it in the same bracket as other eponymous comedies like?Anchorman: The Legend of Ron Burgundy,?Zoolander?and?Borat?- is no surprise; the film’s narrative driven by a brazen, larger-than-life personality conceived to wreak havoc, notch up tension and elicit big laughs. Unfortunately for?The Boss, the film just isn’t as effective or funny as any of those titles, paling by comparison.

The main issue with The Boss is that the boss in question simply isn’t engaging enough: she fails to win the audience over and quickly becomes overbearing, the success ratio of her jokes unimpressive. Offering little new or fresh, there is nothing creative or daring about the humour in?The Boss.?Too often, the movie reaches for the easy, lazy laugh; opting not to strain itself by relying on obvious references, random expletive-laced spiels and predictable slapstick set-pieces – like an obligatory tumble down the stairs, which is unlikely to tickle anyone.

Much of the film feels tired, pungently cheesy and old hat; it’s painfully awkward opening scene hinting at a comedy of dated jokes and one-liners well past their expiry date. Featuring the worst kind of rapping and a distinctly anachronistic and out-of-place cameo by T-Pain, the first few minutes of?The Boss?tells you everything you need to know about this disappointing comedy, and what’s about to happen.

Even less effective than its tepid jokes are the film’s tone-deaf dramatic moments. A movie with a capricious streak, its sudden shifts from ridiculous, fun-loving farce to serious tear-jerker are jarring; undercutting both the humour and attempts at earnestness with confusion. Much of the film is spent zooming in on McCarthy’s Darnell as a brash and animated bully bumbling from joke to joke, with a fair share of the comedy attempting to characterise her as a terror with a heart; a scarred woman hiding the fact the she, like everyone else, bleeds. Sadly, this again proves ineffective; the unearned and unexpected drama of?The Boss’ completely missing the mark.

As bossy as she’s presented to be, Darnell doesn’t own the movie. The best thing about?The Boss?isn’t the boss, but, in fact, her underling, Claire – portrayed by Kristen Bell. An endearing straight-woman to McCarthy’s madcap protagonist, Bell delivers the most convincing performance of the film, her engaging and likeable turn going some way to make up for an anti-climax of a movie-going experience. That McCarthy is shown up in a vehicle that is very much hers is frustrating. She doesn’t even have the best line of the film – “Your pelvic region is the colour of curry” – a funny quip reeled off with some panache by (you guessed it) Bell.

Fundamentally,?The Boss?is let down by the fact that it wastes so many talents. Starring incredibly gifted performers and comedians like former?Daily Show?correspondent Kristen Schaal, SNL’s Cecily Strong, Annie Mumolo and Peter Dinklage (yes,?the Peter Dinklage), the film really struggles to measure up to its cast. The disparity between the quality of the comedy and the pedigree of its stars is startling, making the film an even more frustrating watch.

More than anything, what makes?The Boss?such a letdown is that it doesn’t make the most of its headliner, spurning the brilliant, funny goodness that is Melissa McCarthy. She is better than this, as she is better than movies like?Tammy?- also written and directed by Falcone. Watching McCarthy spend so much time and expend so much energy on a project like this is confounding. She deserves more. We, as fans, deserve more.

That being said, the film’s female-strong cast is also very much welcome, with leading ladies, Margo Martindale and Kathy Bates, lending their considerable acting chops to the comedy, and to its credit,?The Boss does try to tell a touching story about women, with mothers, daughters and Dandelions (not to mention, nuns) prominent and at the forefront of the film.

When it comes down to it, though, McCarthy and Falcone’s irreverent comedy about a foul-mouthed Martha Stewart falls short. In spite of all the fine and loveable actors attached to the film, you’d be strongly advised to watch something else. McCarthy may have a whole host of cinematic hits to her name. This isn’t one.

Much is revealed in the full trailer for ‘Thor: Love and Thunder’