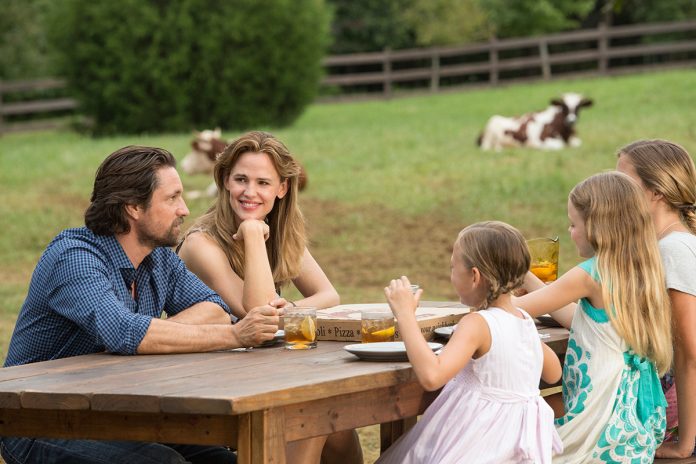 Patricia Riggen’s Miracles From Heaven taps into a very unsettling fear, tugging on the heartstrings as we peer into the lives of parents going through the illness of their daughter and her slowly dissipating health. A challenging issue for anybody to brave, and yet it’s been presented in such a frustratingly mawkish fashion, while the director – alongside screenwriter Randy Brown – seem to be vying tirelessly to show the audience ‘the light’, to a point where you’re almost expecting there to be a collection plate for the local church left by the door at the exit.

Based on the real events that surrounded the Beam family, we meet mother of three Christy (Jennifer Garner), raising her daughters alongside her husband, and veterinarian, Kevin (Martin Henderson). The family are devoted to the church, and have a close relationship with the local pastor (John Carroll Lynch) – but find their faith, and resolve, pushed to the limit, when middle child Anna (Kylie Rogers) falls ill with a serious digestive disorder. The general expectation is that the young girl will be defeated by his condition, but Christy refuses to give up hope, and is willing to travel from their Texas home to Boston, to meet with the revered doctor Dr. Nurko (Eugenio Derbez), who represents something of a last chance, and regrettably, a lost cause.

While faith is certainly a prevalent theme within this tale, and understandably so given how many people subscribe to this particular notion, and use it as a sense of comfort during such challenging, exasperating times in their life, filmmakers have more of a responsibility not to ram the idea of a spiritual intervention down our throats as though genuine – simply as it detracts from the valiance and sheer diligence of the doctors, and fire brigade, discrediting everybody who sought to save this poor young girl’s life. Instead every act, be it positive or negative, is either accredited to being an act of empathy from the Lord, or one of cruelty.

Nonetheless, the leading performances are all more than accomplished, particularly for both Garner and Henderson, who deviate away from overstated sadness and melodrama, to playing their roles with more of a vacancy about their demeanour, a hollowness which is fitting of such a scenario and how people generally feel, and cope, when tasked with such an unfortunate situation. Newcomer Rogers impresses also, particularly given what an emotionally profound performance is expected of her. However all three are persistently undermined by the mawkish, cliched nature of the narrative and how it’s been presented to the viewer.

In one particularly laughable sequence at the end, the picture becomes horribly self-referential, and gives itself an almighty pat on the back. During a speech by Christy at the local church, a couple of questions on the validity of the narrative are posed to her by the curious public, only to be swatted away. Then, somebody who has seen the light, stands up and thanks Christy for telling him (and in effect, us) this wonderful tale, only for a standing ovation to erupt. Likely to be the only one it’s going to get though, to be fair.