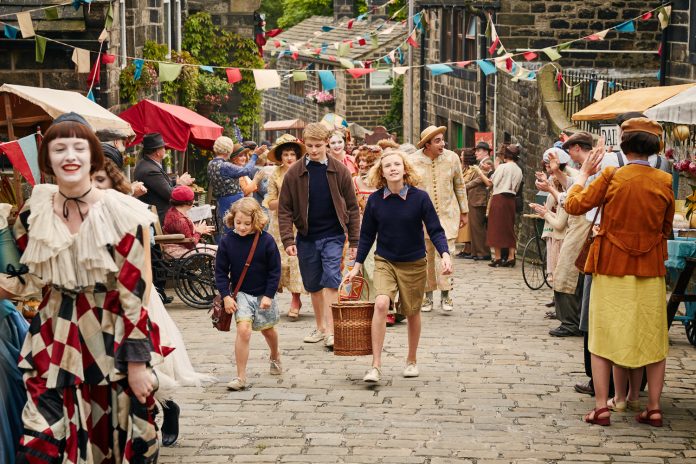 If there is one thing guaranteed from bringing Arthur Ransome’s timeless literary classic Swallows and Amazons to the silver screen, it’s the engaging, enchanting narrative. You know that where this perennial tale is concerned, the story being told is the least of the film’s problems, it’s all about the execution – and for filmmaker Philippa Lowthorpe, it’s been handled in an accomplished, deft manner. However the director, renowned for her work on the smaller screen, has struggled to avoid crafting a feature that feels somewhat televisual in its approach.

The Walkers are setting off on holiday, as a cheerful, if beleaguered, mother of five (Kelly Macdonald) rounds up the troops for a vacation in the Lake District. With her husband away, it leaves pressure on eldest son John (Dane Hughes) to lend a hand, and when his siblings, Susan (Orla Hill), Tatty (Teddie-Rose Malleson-Allen) and the mischievous Roger (Bobby McCulloch) insist on a parent-free camping trip to a remote island on the lake, he’s on guardian duty. Though the self-titled ‘Swallows’ anticipate a quiet getaway, they soon find two sisters, going by the name of the ‘Amazons’ wanting to protect the island from intruders, and while the children enjoy pirate games, a real life threat is upon them, for the local ‘travel writer’ Captain Flint (Rafe Spall) is hiding from the malevolent Russian Lazlov (Andrew Scott), and the kids become unwittingly involved.

What has helped matters tremendously in bringing this renowned tale to life, is the impressive casting, which is spot on with every role. Not just the leading characters, but even supporting roles fall into the laps of talented performers, such as the Jacksons being played by Jessica Hynes and Harry Enfield, and even smaller cameo roles for the likes of John Henshaw and Richard Bremmer. Naturally, casting Enfield will only improve your production, while having Scott on board as the chief antagonist is inspired, for while being such a magnetic, subtle performer, he brings that same vulnerability to a villain as he so often does with the more endearing creations, and it’s a trait that is equally as effective for both.

The youngest two children, played by Malleson-Allen and McCulloch provide a comedic edge, and several ‘aaaahs’ from the watching audience, while the elder two do a commendable job at tackling some of the more emotionally charged sequences. However where this Swallows and Amazons feature falls short, is not knowing exactly who it’s being targeted at. It’s too mature for a younger, primary school crowd, while perhaps not quite edgy enough for those in their teenage years, leaving a rather sweet piece of contemporary cinema lost somewhere in between.