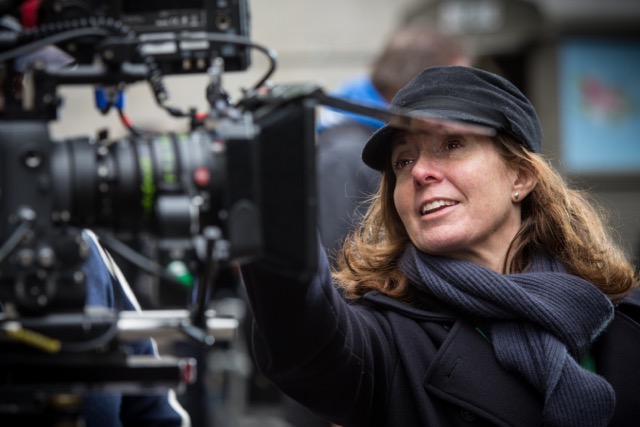 For most young children, to be gifted the opportunity to watch a live recording of the BBC’s long-standing television series Crackerjack is the perfect chance to steal the limelight for a brief while and get on stage – perhaps wave to your parents, or simply revel in being in such close proximity to Leslie Crowther. But not for Susanna White, for the talented British filmmaker remained backstage, marvelling at the mechanics – and behind the scenes is exactly where she remained, and has never looked back since.

“I was a Brownie at the time, and we went to watch Crackerjack being recorded and I remember all of the other girls try and get up on stage and win prizes, but I saw a red light come on a camera and saw that it was a single shot on a presenter and I thought, wow, that’s how it happens,” she smiled.

“This massive lightbulb went on in my head and I went to the library and got a book out on how to make films. Then I begged my parents to buy me a Super 8 camera. I was eight years old and I started making films with my friend, we did bike chases at the local recreation ground. They got lost when I moved house and I was so gutted. I would love to re-watch them now.”

What has been maintained, however, is White’s infectious sense of enthusiasm for the craft, which shone through during our interview.

“Directing flexes so many muscles. I just find it uses every part of me, and I feel more alive than anything when directing on a set. Plus, I love the aspect of collaborating with people with incredible talent,” she continued. “I’m so, so lucky to do my job. It’s about so many elements coming together in an incredibly stimulating way. Directing a film is like having 22 cups of espresso.”

Speaking exclusively to HeyUGuys, we met White in a central London hotel, days before she set off to San Francisco for the premiere of her latest endeavour, the captivating thriller Our Kind of Traitor, born out of the mind of the venerable author John le Carré, and with a screenplay penned by Hossein Amini. Released across the UK on May 13th, there was an ineffable sense of warmth and fervour emanating from the director, passionate about her work and the collaborative process with fine actors such as Ewan McGregor, Stellan Skarsgård and Naomie Harris.

“I got sent the screenplay and I absolutely fell in love with it. I couldn’t put it down, it was such a page turner, and it has a lot of themes that really interested me. I always love that virgin read, the first time you read a script, it’s so crucial and you never get that back again.” she explained.

“When you’re going to commit two years of your life to something, you’ve got to have fallen in love with it. And le Carré writes these complex, layered, flawed, essentially sad people. It’s quite Hitchcockian in that Perry is an everyman who gets caught up in this debacle, the MI6 characters are not at the heart of this piece which you’d associate more with Hitchcock than le Carré.”

The premise is that of a contemporary married couple (McGregor, Harris) who fall into the trap of a beguiling, if somewhat unnerving Russian gangster (Skarsgård) who needs the pair to help pass on a message, a plea, to the secret services in England. Though taking on the form of an espionage thriller, thriving in the notion of suspense – it was the key relationship between the married couple that intrigued White.

“The marriage fascinated me, it felt very contemporary,” she said. “To have two people with demanding jobs they’re struggling to hold down, and the fact Naomie’s character was earning more than Ewan’s and that made him feel emasculated.”

“I really hope people connect to that, because it really mattered to me. A lot of the film for me is looking at gender issues. At the beginning of the screenplay it was written for a dozen pretty ballerinas to tiptoe across a stage, but I made this choice to get Carlos Acosta instead, suspended in the air. For me, a lot of the film is examining what it is to be a man in 2016. What’s it like for a man who has a wife who is more successful than he is? Even though he’s so right on, and he’s proud of her for doing it, there’s a bit of him that feels emasculated by that and it’s his weak spot.”

The meticulous crafting of this narrative was made less of a laborious task for White when blessed with such wonderful actors bringing these creations to life – and she was thrilled to have both McGregor and Skarsgård on board.

“What I love about Ewan as an actor is that he is so relatable and boy next door. You have to side with him. I want people to feel a connection with him. He’s so trusting and likeable and I automatically side with him. Women love him and men like him as well, and that’s important. There’s a warmth and slight innocence about him I think, which is really endearing,”

Skarsgård played a rather more reprehensible character however, though given the affability of the performer it was hard not to also take his side – something White feels very few actors would have the ability to pull off.

“Dima is like the Godfather, a warm family man and Stellan can play those layers, where he’s warm and funny and incredibly magnetic. Ewan falls under his spell, and we do too. So you side with him, but at the same time he has to be able to turn on a sixpence and show he’s capable of killing someone. There are plenty of actors who can play tough mafia guy, but not many who can bring so many layers. It was incredible working with him,”

Having worked with Stellan’s son Alexander on Generation Kill – White joked that she’d like to maintain this habit of working with members of this talented family.

“I want to work with them all, because there are loads of Skarsgård actors! It’s my dream to make a movie with all of them, just need to figure out what the plot of that could be.”

Though taking a jovial approach in parts, White was also able to address pertinent, profound themes with us, that are still causing issues with the industry for female filmmakers. She was genuinely perturbed at not being able to give a more uplifting answer when questioned on the role of women in the film industry – particularly those behind the camera.

“Disappointingly, it’s still a massive issue,” she began. “There’s a report about to come out in the next month which will shock people that shows that 13.6% of films in the last 10 years have been directed by women. It just hasn’t got any better and in some ways it has got worse. I’m sad to still be having the conversation because I don’t really understand that in an industry that is all about the zeitgeist, this should happen. So I’m very happy to have got the opportunities that I have, but I wish there were more people like me doing them.”

The range of projects White has undertaken represents a diverse selection of endeavours, and she admits it’s more down to grasping opportunities with two hands, rather than making conscious efforts to mix things up.

“People say my career is very eclectic, to go from Nanny McPhee to Generation Kill – but that’s partly the result of who has given me opportunities, because as a woman there’s no doubt it’s tougher making it, so my CV reflects people who have given me breaks. But generally I am always led by great writing.”

“I really want to make more authored films,” she finished. “Even some smaller films, because I’ve had the opportunity to do these big-scaled projects but in some ways I’m excited to retreat into a world where the smaller the budget, the more chance you have to have your own voice.”

Talking of which – she is set to return to our screens with the Steven Knight written Woman Walks Ahead – though she was sure to remain somewhat tight-lipped when asked if Jessica Chastain had joined the cast.

“I’m hoping the film is going to begin shooting in September – and we’re hoping she’ll do it.”

Our Kind of Traitor is released on May 13th. Be sure to check back on HeyUGuys this week to read our interview with leading star Stellan Skarsgård.