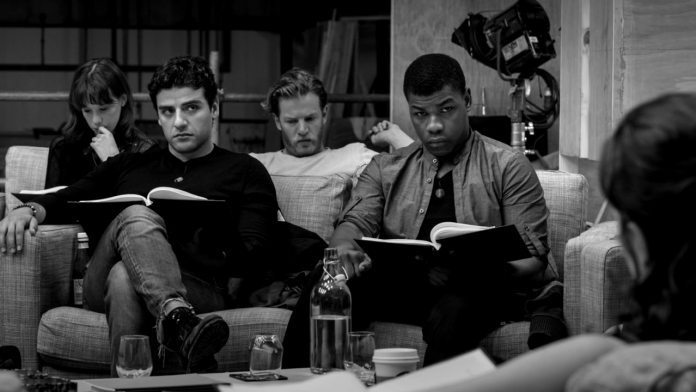 We’ve already seen the list of special features that will come with the Blu-ray of Star Wars The Force Awakens (click here for a full list and a funky trailer).

We’ve seen a glimpse of the Deleted Scenes, one which intriguingly includes this happening…

and also we’ve had a taste of the documentary on John Williams (see a clip of that here).

The special features on the Star Wars discs are pretty high quality, the Episode 1 features in particular were more interesting than the film itself.

Today we’ve got another look at what’s coming in April with the Blu-rey (yes, that’s how I’m spelling it) and it’s a tease of the short documentary on the table read. When this shot hit the internet…

it marked a new era. Not only was this our first glance at the new cast but it signalled that from here on out EVERYTHING was going to be controlled and used as marketing. It worked – as the ever-rising box office total from the film attests.

So here’s the trailer, nothing huge but a nice tease for those who want to delve a little deeper.