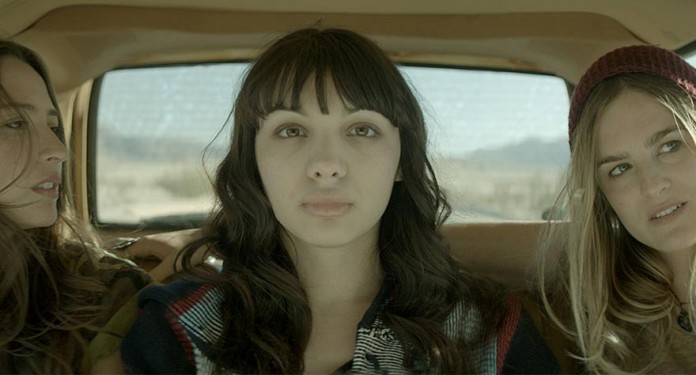 Anthology horror films have haunted our cinemas and (mostly) home viewing schedules for many a decade now. From Ealing’s Dead of Night in 1945 to the recently released A Christmas Horror Story, numerous other titles, including Asylum, Creepshow and VHS, have sullied their place in the sub-genre’s history and the hearts of placated horror fans. This latest entry; Southbound, is terse, significant work, efficiently felling frights and dread in a manner that may even resound with general audiences as well as genre aficionados.

Directed by VHS veterans Roxanne Benjamin, Radio Silence and David Bruckner with Patrick Hovarth (The Pack 2): Southbound instantly grips with an odd, salty intro but is crafted with care and wary for its source. Possibly fearing a veer into cliché, it’s stories entwine with a crisp proficiency while stretching the subgenre into invigorating terrain. Characters spill into subsequent segments, all of which are set on the same sinister stretch of road. This common thread instils unease, suggesting a significant menace may lurk beneath the surface of what’s occurring on screen. Prominent dread provides perspicacity but what makes Southbound most striking is the shrewd writing and the concepts at its core. The stories are guileful and enthralling, while streaming cohesively in a bracing new way, and even though some of the characters are stock, performances boom with gall and gumption.

Prologue piece “The Way In” presents two blood dotted hicks (Chad Villella, Matt Bettinelli-Olpin) speeding from a crime scene. They pull into an ominous truck-stop and find themselves locked in a looping paranormal battle. Slightly lesser second story “Siren” directed by newcomer Roxanne Benjamin, focuses on a hungover female punk band (Fabianne Therese, Nathalie Love, Hannah Marks), stranded on the road in a broken down van. The crew are picked up by an average American couple who promise them food and shelter but have ulterior motives (and Satanic offal) up their sleeves.

From there we encounter “The Accident”: a man named Lucas (Mather Zickel) runs over a girl on a highway while chatting to his wife on the phone. Lucas calls 911 and is instructed to take the barely living body to an abandoned hospital and await further instructions. Kidnap thriller “Jailbreak” trails this accordingly before Southbound is aptly concluded with exhilarating epilogue; “The Way Out”. The paradoxical nature of the stories are shrewdly encapsulated in this fitting finale which aptly clinches the corpus.

Southbound has more similarities with Twilight Zone: The Movie than any of the aforementioned sub-genre entries. It’s stories are weird, complex, foreboding and presented within a wily, pioneering structure. Southbound doesn’t skimp on the bloodshed and supernatural pluck but it’s prime ingenuity derives from the narrative while some finely fashioned CG beasties do justice to digital trickery in an age (and genre) where physical effects are generally more feted.

Southbound doesn’t submerge itself in action and violence for the sake of shallow spectacle. The stories are well hewn with unique central premises, decent performances and efficiently woven in an manner that’s unlike any previous horror anthology that springs to mind. Despite some fallacious characters and a slightly swaying second segment, Southbound engrosses from the outset and is effectively realised by the directors’ abilities to harvest terror through novel ideas, script ingenuity and by playing with audience expectations.