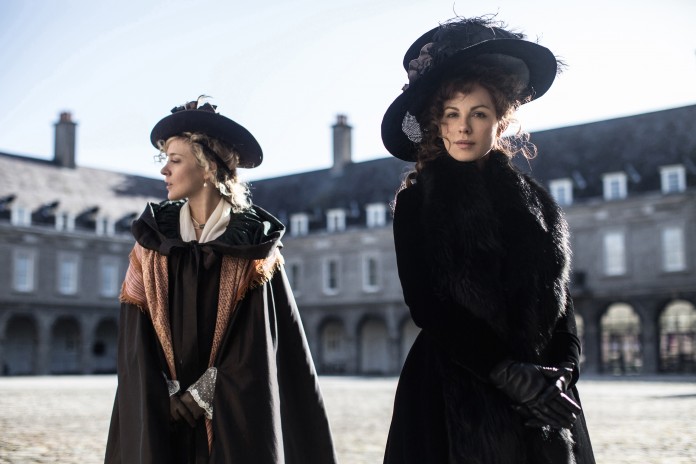 Based on a short novel by Jane Austen, this brisk comedy has all the traditional appeal of the writer’s better known work – with an added dash of Whit Stillman.

Beautiful widow Lady Susan Vernon (Kate Beckinsale) is forced to seek shelter on the estate of her in-laws following a spate of rumours surrounding her conduct. We soon learn that Lady Susan cares not a jot about what society thinks of her, largely because she has the ability to turn even the most unlikely foe into a confidante.

As the scheming escalates, Lady Susan’s ultimate aim appears to be centred around securing the future of her daughter Frederica (Morfydd Clark), who is rapidly approaching adulthood. Frederica’s intended is the wealthy but buffoonish Sir James Martin (Tom Bennett). As is her way, Susan continues to flirt outrageously with a Reginald de Courcy (Xavier Samuel), a young suitor whose family are worried about the dalliances.

Lady Susan has a close friend who shares an ability to manipulate those around her; Alicia Johnson (Chloe Sevigny), who is only thwarted by the smartness of her husband (Stephen Fry), who wisely keeps a close eye on his wife and regularly threatens to send her back to the uncultured backwaters of America. The Machiavellian scheming of Lady Susan (also the title of the source material) is truly a sight to behold. She oozes charisma, beauty and wit to the extent that you forget quite how nasty her intentions are.

Kate Beckinsale is outstanding in the role, carrying the smart dialogue with natural ability. From the opening moments when she hastily retreats from her latest indiscretion to a few scenes later when she essentially turns a loyal friend into a slave, we are enthralled with just how devious a character she has the potential to be.

The direction and script by Stillman feels like authentic Austen with all the modern trappings you could ever wish for. The film is light, but never frothy. Its familiar but also utterly unforgettable in its clever use of characters and idiosyncrasies to keep the action up to date.

At times you feel that you have reached the limit of how low Lady Susan will stoop, but as with all the greatest screen anti-heroes she has several more tricks up her sleeve. The way in which she continuously holds favour with the man she intends to marry to her daughter is a wonder in itself. Its also fair to say that Tom Bennett, who plays the man dismissively described as ‘a bit of a rattle’, steals almost every scene he is in with his inane waffle and subsequent gullibility.

The romance is kept at a safe distance so as not to overbear on the comedy. It’s a smart move, Lady Susan isn’t the soft and romantic type, you suspect she gets exactly what she wants in and out of the bedroom. Stillman turns a short novel, published more than fifty years after the death of the author, into a breathless film that is high on laughs. His previous films have strayed into this territory but in the period wrapping of Austen’s work it feels more relevant than ever.

In the masterful hands of the director and boosted by a deliciously manipulative performance by Kate Beckinsale, this feels like the most refreshing take on Austen’s work ever put on screen – and given that we’ve recently seen Pride and Prejudice and Zombies, that’s saying a lot.

The movie goes on general release in the UK 27th May.

“I know what you did, psycho!” Full trailer lands for Rian Johnson series ‘Poker Face’