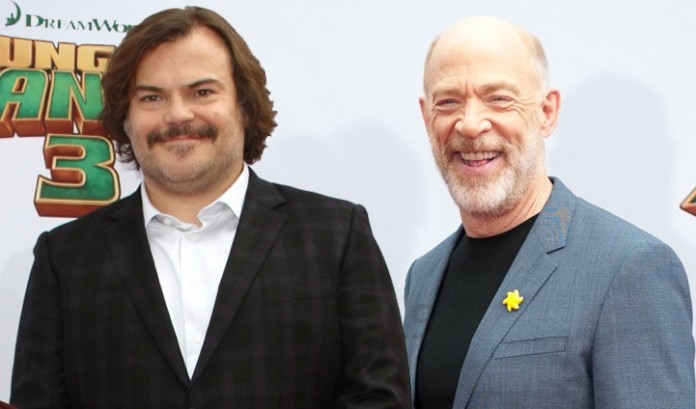 This Friday Dreamworks Animation takes us back to the mystical land of Ancient China where we rejoin the Dragon Warrior Po and the Furious Five in their latest big screen adventure. After defeating Lord Shen and saving Kung Fu, order has been restored to the Valley of Peace. Master Shifu (Dustin Hoffman) announces his retirement from teaching and passes training responsibilities on to Po (Jack Black).

As Po grapples with his newfound title and responsibility, he is unexpectedly reunited with his biological father Li Shan (Bryan Cranston). Before they can catch up and reveal some of the secrets of Po’s past, a new threat emerges in the form of the spirit warrior Kai (JK Simmons), a dangerous former rival of Master Oogway.  Now Po must become a master of Chi and reconcile with his long lost father if he is to stand any chance of defeating this new enemy.

HeyUGuys recently caught up with the cast and crew of this exciting new entry in the Kung Fu Panda franchise to discuss the storytelling process, kung fu, and a little rock & roll.

Why did you decide to be a part of Kung Fu Panda 3?

JK Simmons: My whole family was a big fan of the first two movies, my kids were younger obviously. When the first one came out in 2008 my daughter was 6, my son was 8 or 9 and we loved the first two movies. I didn’t know what the part was, I just said as long as it’s the same team creatively and the same cast I’d love to do it.

I don’t think I saw any renderings of Kai until the first session with [the directors] Alessandro and Jen, and we just kind of tried stuff and I went with my first instinct, and the good thing about animation is that you get to keep trying and trying and trying and they have tons of options and it sort of evolves.

I know they talked about whichever actor plays the part would the voice be altered technically, but they decided to just go with what I was doing. The fun thing about playing Kai or any kind of an animal character, was the few times where you get to blend the English speaking voice into sort of animal sounds. In Kai’s case angry grunts and snorts because he’s this bull type character. A guy named Billy West that I do animated work with sometimes calls it “theater of the mind” it’s just your imagination in concert with the writers and directors imagination, a lot of times in the animated work I just have my eyes closed.

You are less self-conscious and more free, and if you’re working with directors that you trust, it just lets you try anything, you don’t have to reign yourself in. On a feature, especially if it’s a director you don’t know well enough to have total trust with, you’re reluctant to go really far with a certain choice. It’s like “if I give you that one take, and that’s the one you like, then maybe it’s not how I want to look, or not how I perceive the character to be.”

So did you have to pull back a little bit on this project? Did you ever feel like you were giving them too much?

JK: Well you do everything, that’s really the point. You can dial it up to 100 or you can dial it back down. Now let’s try a few where you’re screaming at the top of your lungs, and you know out of that is some of these decisions, we’re doing more of the recording before the animation is done. And in my case I came on slightly later onto this project, a lot of the animation was done already. So it was like, you’re across a canyon from him, so they need to be at a certain volume.

The Kung Fu Panda movies are a blend of action and comedy, did you have a good time adding the comedy to the big character action?

JK: Yeah! And that’s in the writing too you know, because Kai is this big scary supernatural villain but I think the [comedy] aspect of it that was really fun to play. He’s been banished to the spirit realm for 500 years so no one knows who he is. So he shows up and his ego is sort of bruised and it’s like “come on fellas! You don’t know who I am?”

So we are about to get a brand new version of Spider-Man, which means some poor soul will inevitably have to fill your shoes as the next J. Jonah Jameson. What sort of advice would you have for the actor who has to fill your shoes?

JK: I would say just do what I did and just go back to the comic books and figure out what your take on that guy is. And above all, have fun because that was super fun!

Next we spoke with the Dragon Warrior himself, Jack Black

Is it comforting, or difficult to come back to a role you’ve done twice before?

Jack Black: It’s always been fulfilling and fun. I love to come back. I mean as long as there’s some growth, some personal growth for the character. And he’s got a lot to learn in this movie. With the addition of the biological father, and the new role he has as the teacher in the village of the pandas was a great new direction for the character, it was really fun!

There’s a lot of improvisation. Sometimes I make up scenarios and I use different language that obviously would not be appropriate for the kids version, but we could have a very funny rated R version if we wanted to go that way. I keep on telling them but they don’t wanna listen. THE DVD EXTRA! UNPLUGGED! Whatever you call it. UNCUT! Only for parents. Kung Fu Parents.

Now I want to ask the question that everyone is dying to know, is there or is there not a KG (Kyle Gas) cameo in Kung Fu Panda 3?

JB: You know…there is NOT! That is a huge faux pas! I wish you had told me about that earlier because it’s too late now! Maybe I can sneak him in though…right under the wire. He did have a cameo in the first one though. But uh, he’s busy. We still gig all the time. He’s got his other band. He’s plenty busy. Don’t worry about Kyle!

I love to play, and you know I don’t get paid for this part [interviews]. No. They finished paying me a long time ago. So when we go out with Tenacious D actually, pays the rent. Pays the bills.

So the character of Po really loves geeking out about things in all of these films, what do you personally geek out over? Is it music? Comic books?

JB: Yeah…it is music. You know if I get to see, if we play some of these festivals I’ll go around and watch my favorite acts and geek out hard on some of them I’ve never had a chance to see, that’s always amazing to me.

I like old punk rock, there’s this band called “OFF” that has an original member of Black Flag in it. And if you think about it, Black Flag was named for an insect poison, Black Flag you would spray it on the bugs and it would kill em? And OFF! Is an insect repellant so it’s kind of like the sequel. And they were amazing, and I geeked out in the wings definitely. Another band EAGLES OF DEATH METAL. They are actually really funny, they’re really good band and they rock so hard. And the Pixies, I’ve seen the pixies a ton of times. That’s probably my favorite band. That Frank Black, he’s a hero. He’s like the Kung Fu Panda of rock. He’s big and fat, but he’s very relaxed and he’s very talented. He writes some amazing music. Beautiful music. But HARD ROCKIN. Beautiful and hard at the same time…that sounds…okay next question!

Was it easy to slip back into the role of Po?

JB: It was very easy, I mean, it just took a few minutes and I’m back to my childhood. Cause that’s all we’re really talking about, just being a kid. That’s all Po really is. Very enthusiastic about his Kung Fu, and I just think about my rock heroes.

Our thanks to Dreamworks Animation, JK Simmons and Jack Black.