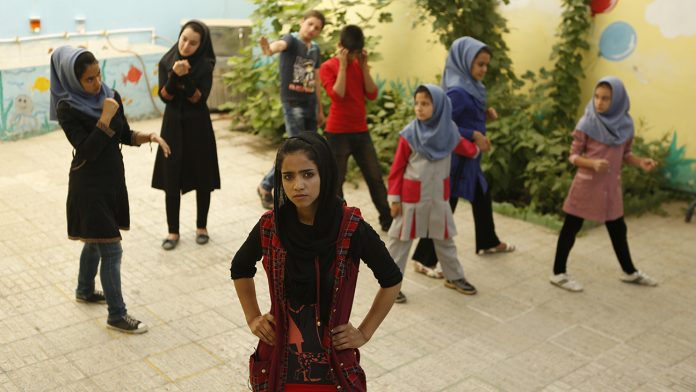 Rap music and hip hop activism occupy a powerful place in popular culture. Conscious rappers across the globe have long been using the appeal of their music to communicate a message of empowerment and to spread their stories wide. Beyond the constraints of geography, poverty, prejudice or political oppression.

Afghan refugee Sonita Alizadeh, adrift in Iran, is one such talent. Raising her voice loud and proud – against the traditions of her culture – to protest forced marriage. The value of such a gift is incalculable.  Madly in love with Michael Jackson and Rihanna and this bright 14-year old girl seemingly has the world at her feet.

But in Afghanistan women are forbidden from singing.  And in Sonita’s world – to her parents and those of her peers – a teenaged girl’s value is entirely monetary. As a bride she is worth $9,000. Sonita recognises that her family’s approval of a husband would signify the end of the little independence she has known. Friends have walked the same path before her and there has yet to be a happily ever after in sight.

Rokhsareh Ghaem Maghami’s immersive documentary opens with Sonita painstakingly positioning a photo into a scrapbook. One of the few possessions in her sparsely furnished room. The image is of an audience of cheering girls at a concert. Joyous and carefree. She nervously hopes for a similar reception when she herself performs. As the camera follows her through the streets of Tehran we learn for ourselves that Sonita can already captivate a crowd. Albeit a more modest one. For now.

Sonita’s future is uncertain. She lives with her sister and niece, undocumented and unregistered, landlord pounding at the door. For now she has given herself the surname of Jackson (in honour of her idol) and works hard for a small wage and broader education at a local http://onhealthy.net/product-category/weight-loss/ refuge. It is easy to overlook just how young she is. She bears the burden of her life so effortlessly. Until, in one painful role play moment of recall, she breaks down.

She and friend Ahmad wish to form a band. Rehearsing diligently and saving to record their tunes. There are many hurdles to overcome first. Governmental permission is required for singers and the cost to lay down a single track is ,000. For now these aspirations are parked in the scrapbook of dreams. Alongside a car, a home and a fairytale future.

On a whim, as the despondent performer’s hopes fade, she issues the camera bearer a startling proposition. Sonita’s hostel mother too adds her voice to the dissent. The quiet force of these women, united, more poignant than any torch song. And before too long the fourth wall falls as the filmmaker, Rokhsareh, steps into her own story…

Sonita’s story is an exceptional one and Sonita is an exceptional film. It does not chart the sparkling rise and rise of a pop star but observes and then assists in the evolution of the real and complex life of an independent young lady who uses her voice to set her free. Rokhsareh’s involvement raises pertinent questions about the role of documentarian (even among her own team) but her undeniable influence effects real and permanent change.

This is an uplifting and inspiring film, released in time to offer half terming teens a perspective broadening alternative to Tom Cruise and Trolls. Skirting the more complex emotional fallout of Sonita’s choices (and Rokhsareh’s intervention) was an arguably commercial choice but ultimately one that works. Back among her family Sonita watches the next generation singing shyly along to the lyrics she penned. Her scrapbook dreams are coming true, right before her eyes.

Sonita opens across the UK on 21st October