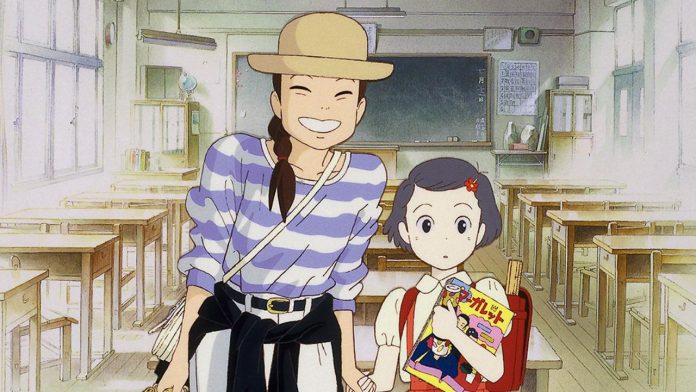 As their (supposedly) final film, When Marnie Was There, nears its UK cinema release, one of Studio Ghibli’s productions from 1991, Only Yesterday, is also being granted a well-earned (and timed) theatrical run. Despite acquiring the distribution rights “as part of a more comprehensive agreement”, at the time, The Walt Disney Group resisted releasing Only Yesterday in the US, apparently due to it’s numerous menstruation references.

Now, thanks to distributors GKIDS, Isao Takahata’s delayed feature finally arrived in America on 1st January of this year, with an all new English language dub, and finds a home in UK cinemas from today.

The story (which parallels When Marnie Was There’s) tells the tale of Taeko (Daisy Ridley); a single, 27 year old fantasist who travels from the city to visit her grandma in rural Onoya and work with her on an organic farm, picking flowers to source the paste for Rouge, a cosmetic which none of the farmers can afford. While there, Taeko befriends former city boy turned cultivator Toshio (Dev Patel), a scatty sentimentalist with a penchant for Hungarian peasant music. Taeko recalls misplaced childhood memories, inadvertently re-evaluates the past before realising what is most important in her life and decides what it is that she ultimately wants from the future.

Director Isao Takahata’s (Grave of the Fireflies, The Tale of the Princess Kaguya) shimmering “reality” based drama is as equally magical as Ghibli’s more fantastical works but is also remarkably sad, rousing and deftly cinematic. Set in 1982, the plot glides into the protagonist’s past to make sense of her present while rolling out soaring fantasy sequences, dazzling animation and an emotive theme synergy between the characters, story and central concept. Takahata synchronises Taeko’s journey with the viewer’s elucidation as some scenes and sequences seem initially superfluous and irresolute yet glide into relevance at the film’s culmination.

A sequence where Taeko’s family slice, serve and devour a pineapple (a costly, rare fruit at the time in Japan) initially perplexes but buds into significance as the story progresses then flits back to the future and again to Taeko’s childhood. This proves as pertinent as her train journey, horticultural antics and the epiphanies she experiences while working on the farm. In true Takahata style, the imperative substance is reserved, simmering at borderline subtext level before blooming into logic in retrospect. It’s most vital moment is unveiled in a sequence that plays throughout the end credits but, like the nucleus/ nub in Taeko’s life, this is sourced from its character’s fickle dithering, off-the-cuff recklessness and decisions reached on a whim.

In the case of Only Yesterday (and maybe in all Ghibli movies) the story’s heart can be found in its most intrinsic human facets: the still, serene smiles on the farm workers’ faces as they pick flowers in the sun-kissed fields, quivering dew beads on plant petals that jiggle to the sound of a slow rising choir. The stunning scenery/water-colour/backdrops (courtesy of Studio Fuga): all animation design facets that combine to make Only Yesterday staggeringly evocative and almost supernatural yet an overwhelmingly human viewing experience that’s an absolute must for Ghibli aficionados and anime fans in general.