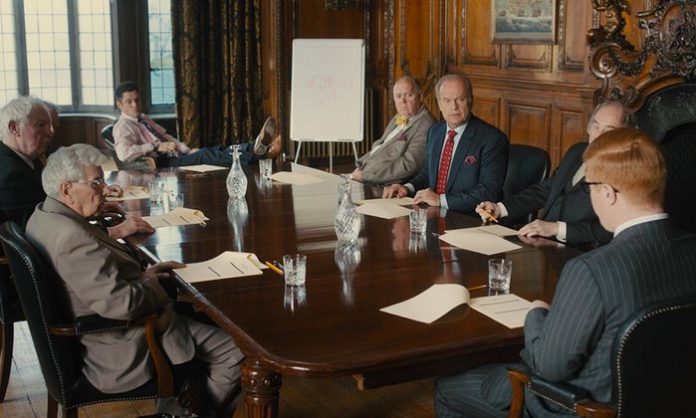 Kelsey Grammer delivers a convincing performance, and an excellent British accent, as Sir Charles Bunbury, the kindhearted but hopelessly out-of-his-depth chairman of 200-year-old family-owned private bank, Tuftons. Despite never having displayed any aptitude for it, Charles married into the empire and was promptly handed his position much to the chagrin of his frustrated (and far more qualified) wife Penelope (Tamsin Greig).

Unable to comprehend the details of the financial world, he defers most of his decisions to the outrageously manipulative and calculating Nick (Mathew Horne). When Nick talks him into investing his wife’s pension fund in a gas company in the fictional land of Nurgistan, the deal goes bad and leaves Tuftons down £2.5 billion. The affable Charles is immediately tossed out and the vulnerable bank is snapped up by American banker Richard Grinding (John Michael Higgins).

Penelope, understandably furious, goes on a rampage and destroys all of Charles’ prized possessions before tearing off in her car and leaving him to wander along the Thames and consider ending it all. A chance meeting with investment-savvy homeless man Oscar (Pearce Quigly) prompts him to reconsider, and a plan is eventually hatched to restore Tuftons and win back the affections of his wife with the help of their estranged anti-establishment daughter Annabel (Sonya Cassidy).

Some of the funniest moments within this title derive from the snarky conversations between Charles and Penny. The relationship is genuinely compelling even if the dynamic is a little confusing. In this day and age it seems perplexing that Charles would be able to make so many crucial decisions in the running of Tuftons when Penny is the logical heir and has all the experience and knowledge required to chair it herself. An awful lot is left up to Charles despite making it clear that his main job is to shake hands with other rich people, make jovial toasts and generally just try to amble about without screwing anything up too badly.

Early on in the film, Penny and a Tuftons financial analyst stand in the throng at a party practically wringing their hands with fear that Charles will reveal some damning information about the bank. The ‘villains’ of the film, the ambitious Nick and the suave but calculating Richard, are one-dimensional stereotypes and are a little too over-the-top to be taken seriously. There are also a couple of subplots that do very little for the pacing of the film. One involves the aforementioned financial analyst’s attempts to lose his virginity to the resident office hottie and the other involves Annabel’s idealistic and naive band of hippies crusading against the powers-that-be and embracing ‘freeganism’.

If there’s a real message about rejecting consumerism and criticising the elitist world of private banks, Breaking The Bank puts it across weakly. There’s very little punishment being doled out and the ending leaves the characters in more or less the same situation they started in, albeit with a more tightly-knit Bunbury family. Despite its issues, there are still some laughs to be had, and fans of old-school British comedy would do well to give this a chance.

“We’re facing the end of the world!” Trailer drops for Netflix animation ‘Trollhunters: Rise of the Titans’