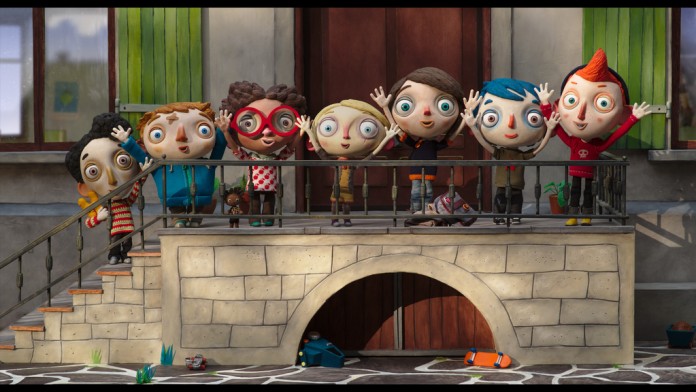 Claude Barras makes his feature debut with the intriguingly titled My Life as a Courgette. The story is based on the book by Gilles Barras and has been beautifully adapted for the screen by Celine Sciamma (the director of Girlhood and Tomboy). Sciamma obviously has an ear for children and teens, for this is a wonderful screenplay that rings true. Combined with Barras’ delicate direction, this is joy to watch despite its heartbreaking subject matter.

Courgette is a nine-year-old boy who lives with his beer-swilling mum. He spends much of his time out of her way, up in the loft from where he flies his homemade kite. After an unfortunate accident, Courgette finds himself orphaned and sent to the children’s home. Here he meets a motley crew of kids who are defined by their individual quirks and their own unique domestic horror stories which range from drug addicted parents to paedophile dads via deportees and armed robbers. Thus the home is filled with broken survivors, whose ringleader is the redhead Simon. At first glance, he’s your regular bullyboy as seen in so many children’s stories from Tom Brown’s Schooldays to Harry Potter. But Simon’s tough guy exterior is his armour and he soon reveals his true colours.

While this sickening and sad storyline is not what you expect from a children’s animated movie it works surprisingly well. And if you thought there could not possibly be any laughs, you’d be very wrong, for this film is often as hilarious as it is heart wrenching. The film plays on the innocence of children, so when Raymond the kindly police officer asks Courgette why he has drawn a man on one side of his kite and a hen on the other, Courgette replies that it’s his dad and his mum says his dad really likes chicks. Then there is the orphan Jujube, who is convinced a man’s penis will explode after sex. This is thanks to misunderstanding his first sex education lesson from Simon, who gained all his knowledge from watching his parents’ DVDs.

Barras’ film is no catalogue of disasters, either. Far from continuing Courgette’s tortures, once he is out of his own home, almost every adult he comes across is kind and has his interests at heart. And thank heavens for that, for the audience would struggle to witness any more pain in these children’s lives.

The stop-motion animation looks beautiful and there are parallels with Tim Burton’s The Corpse Bride, for the characters have enormous eyes, wispy limbs and are of a slightly deathly pallor. Like that film, Barras tackles a difficult subject for a child and does so with immense tenderness and skill. The genius of this animation is in making these very unrealistic faces portray very real emotions, particularly the expressive eyes. There is also something of Peppa Pig here with the same very basic-looking cars, while the orphanage setting looks like it’s been drawn from a board game like Cat Attack. But of course behind that apparent simplicity lies amazing technique: some of the loveliest animation appears when the kids take a trip to the mountains to see the snow.

Barras has bravely tackled an almost taboo subject and made it palatable and manageable for children and adults alike. His film could be a catalyst for conversations and perhaps revelations, showing children that whatever they are suffering there are people who will help and that all is not lost. At just over an hour long, it might have problems screening at cinemas, but it would be a damn shame if this film didn’t get the distribution it so deserves.