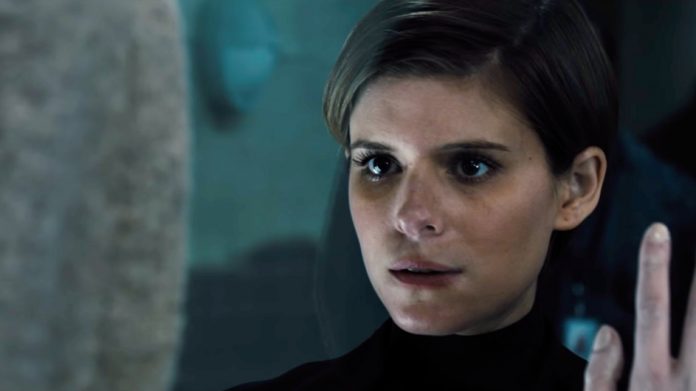 The way we build up towards our first real glimpse of the eponymous protagonist in Luke Scott’s Morgan is reminiscent of The Silence of the Lambs, in how the suspense heightens and intensifies as we lead towards our first meeting with a character we’ve heard much about – much like we did with a certain Hannibal Lector. Scott (son of Ridley) presents his debut feature with an affectionate nod by way of Jonathan Demme’s seminal endeavour, as we too adopt the perspective of a young woman entering into this murky world to examine the dangerous subject. Though the set-up, in this instance, is far more rewarding than the underwhelming pay-off, that makes for a frustratingly conventional final act.

Kate Mara plays Lee Weathers, a corporate risk-management consultant tasked with producing a report on the laboratory that is home to an artificial being that goes by the name Morgan (Anya Taylor-Joy). Five years since its creation, Morgan has the appearance of a teenage girl, incredibly lifelike in its mannerisms and sensibilities. As such, its creators Dr. Ziegler (Toby Jones) and Dr. Cheng (Michelle Yeoh), as well as behaviour analyst Amy (Rose Leslie) have grown attached to Morgan, in a way that could tamper with their supposedly objective experiment. Their trust comes at a cost – when Morgan violently attacks Dr. Grieff (Jennifer Jason Leigh) which is what provokes Weathers’ journey to this remote location, having to determine whether or not they are to terminate the life of the potentially defected creation.

Given we witness the CCTV footage that shows Morgan savagely stabbing a doctor in the eye in the very first scene, it creates an intensity which lingers throughout the rest of this production. In spite of her calm demeanour and ability to feel regret for her actions, you adopt the perspective of the cynical Weathers, unable to fully trust her, always on edge, anticipating a second assault – and the film survives off this very notion.

Weathers is not nearly empathetic enough as a protagonist however, and when comparing again to The Silence of the Lambs, it was so imperative we rooted for Jodie Foster’s Clarice Starling, and though we fully invested in her as a strong lead role, she remained vulnerable and vitally fallible, which should be an essential ingredient in evoking an emotional response from the viewer, but Mara’s turn is too empty and cold, never getting the viewer on-side in a way that she should. Nonetheless, supporting performances from Jones – and the striking cameo from Paul Giamatti, do enough to make amends, as both actors prove that no matter how small a role on paper you may have, to be so engaging with it can make a significant difference.

The narrative does lose its way as we progress towards the latter stages however, and a patent lack of ideas seems to kick in, as the film takes a somewhat lazy turn, away from the intricacy of the intriguing opening act, instead becoming an all too generic affair, not quite sure where to turn.