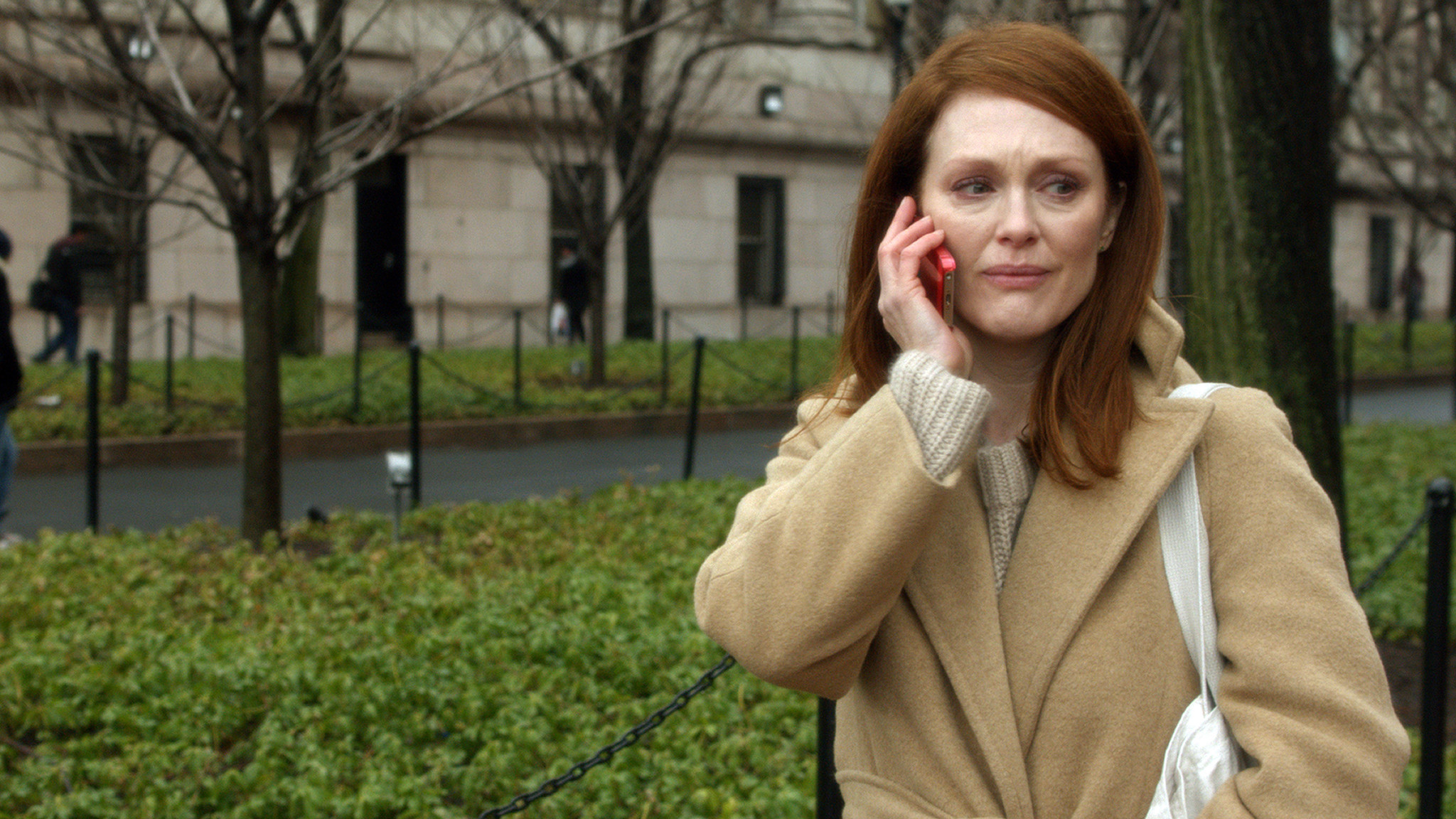 Still Alice has propelled its star Julianne Moore to new heights – as if the extraordinarily talented actor needed it. Her Oscar glory almost pales in comparison to her already glowing career; a plethora of varied performances, each one bursting with the nuance and vibrancy of a true master of the form.

That’s Moore; an unstoppable acting force, and she shows no signs of stopping. Let’s take a look at her career so far.

We’ll start at the beginning; Moore first starred in a slew of TV movies, showing that she wanted first and foremost to be on the big screen, even if she did end up on the smaller one a lot of the time. A bit part in 1993’s huge hit The Fugitive as Dr. Anne Eastman, starring Harrison Ford and Tommy Lee Jones, allowed her to shine, showing the audience how she can stay in their heads even with a screentime greatly smaller than her big star counterparts. But she wouldn’t stop at running circles round Ford; after a few years fulfilling more thankless roles (The Lost World: Jurassic Park, anyone?), she really got our attention in 1997 with Paul Thomas Anderson’s Boogie Nights.

The following year was no less successful for Moore. The Coen brothers classic The Big Lebowski proved her cult movie credentials as Maude Lebowski, a mysterious millionairess who lures Jeff Bridge’s Dude deeper into the ten-pin rabbit hole. The same year, she reunited with her Lost World co-star Vince Vaughn for Gus Van Sant’s shot-for-shot remake of Alfred Hitchcock’s horror, Psycho, as the protagonist’s sister Lila Crane. But the less said about that misguided exercise, the better; it’s better to focus on 1999’s Magnolia, another team-up with Paul Thomas Anderson.

She played Linda Partridge, the cheating wife of a dying husband, and played the part with the kind of conviction that sold Magnolia’s sweeping themes of coincidence, destiny, and redemption. It may even have been the first part she played that showed the world she could carry an entire movie on her own, let alone part of an ensemble.

A couple of years later, she took on an iconic role and made it her own as Clarice Starling in 2001’s Hannibal, adding different layers to the character than Jodie Foster’s interpretation. At this point in her career, Moore could have chosen any big-budget franchise to hop onto, and make millions doing so, having proven many times now that she was an actress that could do commercial just as well as independent.

Instead, she opted to take more challenging roles in interesting films for the next few years: Laws of Attraction, The Hours, and Marie and Bruce, among others, took up her time until 2006, where she starred in Children of Men alongside Clive Owen. The sci-fi masterpiece from virtuoso director Alfonso Cuarón lent everyone involved in the critically hailed project even more credence in their talents, and none more so than Moore; she rounded out the decade with spots in both Blindness – another ambitious, yet less successful sci-fi – and a stellar performance in A Single Man.

While it was Colin Firth’s show, Moore was the one who injected it with the life that kept the audience on its toes, her unique handling of a stereotype (a rich, middle-aged bourgeois woman) lending the part a nuance that we wouldn’t have gotten if another actor took the role.

2010 onwards, and Julianne Moore’s gradual takeover of the cinema had begun proper. The excellent The Kids are Alright saw her juggling bisexual instincts with maternal ones, while Crazy, Stupid, Love also allowed her to delve into lonely housewife mode with results hugely affecting for what was, essentially, just a romantic comedy. What Maisie Knew saw her play a hollow rock star, whose conflicting passions over her daughter and her career have never been conveyed better.

She’s taken a few duds, too, but all of them were gambles: Non-Stop and Carrie all had potential, but failed outrightly despite Moore’s energy. Even if the movie is bad, Moore isn’t – and when she does choose a massive franchise to join, she chooses wisely. The Hunger Games: Mockingjay Part 1 and Part 2 see her join the only Young Adult franchise worth making it to the big screen, and although her part as President Alma Coin is small, her presence isn’t.

And that, of course, brings us to the present day: Maps to the Stars, a menacing David Cronenberg mosaic of selfish Hollywood types, has given her perhaps the best performance of her career so far as Havana Segrand, a talented yet self-obsessed starlet who keeps trying, and failing, to fill the shoes of her dead mother.

But what about the film that earned her the Oscar? Still Alice would have been a lesser film without Moore at its centre; occupying almost every frame of this sensitive, if unremarkable movie, she gives us an emotional framework to cling to as Alzheimers’ sufferer Alice Howland, having finally received a lead role worthy of her immense talents: Moore is the fifth star added to most of the gushing reviews out there.

Where will she go from here? All we can think of is that the Academy better start putting in an extra order of gold statuettes, reserved solely for the many future successes she – and us – will enjoy.

After the Wedding Review