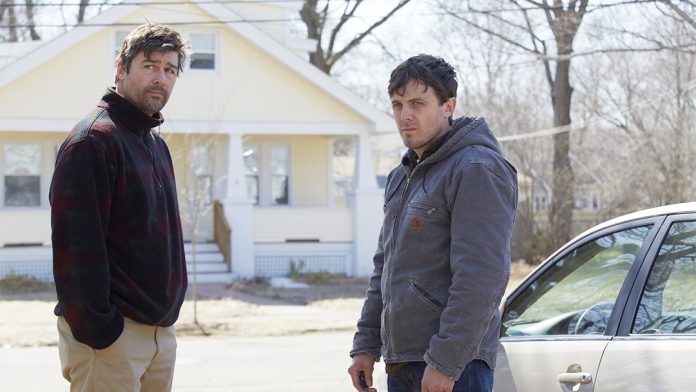 Kenneth Lonergan’s critically venerated Margaret faced a somewhat challenging release, resulting in multiple law-suits that steered the attention away from the film’s sheer brilliance and onto the controversy surrounding it. His follow-up feature Manchester by the Sea should, however, face a rather more straightforward release, particularly given this breathtaking drama has well and truly kickstarted the award’s season, as one of the most absorbing features you’ll have seen all year – with Affleck in particular a very early contender.

Casey Affleck plays Lee Chandler, a handyman forced to return back to Manchester following the untimely death of his older brother Joe (Kyle Chandler), who suffered from a weak heart. Reluctant to head back to a town full of dark memories, concerning his ex-wife Randi (Michelle Williams), he is surprised to learn that he has been left as the guardian of his teenage nephew Patrick (Lucas Hedges), and so moves into his brother’s house until he’s figured out quite how to navigate his way around this tricky situation. Both grieving, the pair may just need one another to get through this tumultuous time.

When reading over the synopsis to this title you couldn’t be blamed for expecting a rather generic ‘distant uncle attempts to rekindle relationship with problem child’ narrative, but Lonergan subverts expectations, for Patrick is a well-brought up kid, and instead it’s Lee who has the problems. But every single character that makes up this compelling narrative is well-rounded, which is the sign of a remarkable screenplay, as there simply isn’t a wasted line, every role, no matter how small, is nuanced and comes with their own respective set of issues to contend with. Lonergan allows his characters – and actors – the freedom to develop over time, and almost akin to a European production, he allows the camera to just linger, longer than you would think necessary, thriving in the mundane as much as the melodrama. The use of music too, particularly the classical inclusions, help to create an indelible tone that adds so much to the story at hand.

The pacing and structure of this film is so accomplished, with Lonergan patiently feeding the viewer snippets of information through flashbacks, as we slowly paint a picture of our protagonist and learn about why he is like he is, slowly crafting, and changing our opinions as we progress. The commitment to realism is striking, even to the smallest details such as when Lee is on the phone to Patrick’s principle, and their conversation keeps cutting out because the former’s phone has a poor reception. Though a (frustratingly) common occurrence in real life, writers generally just don’t think to include that. When you have a scene planned out where a conversation takes place, usually you just watch it unfold in that exact way. But Lonergan has other ideas, and though it has no bearing on the narrative, it’s the meticulous details such as this which enforce the naturalistic approach, and ensure that the viewer is completely onside, which is imperative as we reach the more dramatic sequences.

That being said, the film opens, tonally, in a slightly contrasting way as a series of skits transpire as we first meet Lee and watch as he deals with various customers he’s working for. It’s somewhat overt in its comedic tendencies and as such not quite as authentic, but that soon dissipates. That being said, Manchester by the Sea, somehow, manages to remain funny throughout, with several laughs to be had, deriving from the quirks and idiosyncrasies of everyday life. For a film this dark, and one that will have you crying, and shaking in parts, to still inject humour along the way is the sign of a truly incredible piece of cinema, from a filmmaker that has marked himself as one of the most important working today.

Every Breath You Take Review