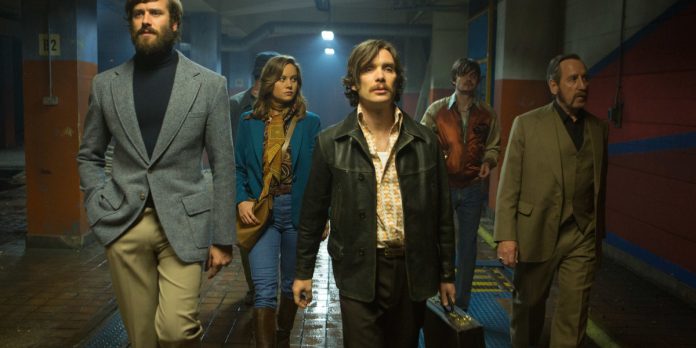 It was supposed to be so easy. The notion that prolific auteur Ben Wheatley’s latest endeavour Free Fire thrives off. Needless to say, everything descends into complete and utter chaos, as a film taking place in real time, with a small collective of actors and in one single location (not for the first time where this filmmaker is concerned). Akin to a stage play in that regard, Wheatley never once compromises on the cinematic nature of the film, as the innovative director continues to hone his craft and develop his distinctive brand, with this unadulterated slice of pure entertainment.

Set in Boston in 1978, Justine (Brie Larson) is putting an arms deal together, linking up IRA buyers Frank (Michael Smiley) and Chris (Cillian Murphy) – complete with the former’s idiotic and worryingly unhinged junkie Stevo (Sam Riley) – with the charismatic Ord (Armie Hammer) and the eccentric seller of weapons, Vernon (Sharlto Copley). A straightforward transaction appears to be on the cards, but tensions rise when the latter, alongside accomplice Martin (Babou Ceesay) bring the wrong guns. When driver Harry (Jack Reynor) enters into the fray things really do begin to get messy – as he recognises one of the buyers, and not for the right reasons. What transpires, is sheer carnage – a bloody game of survival, as gunshots provide the soundtrack during this unrelenting shootout at an abandoned warehouse.

The set-up to this picture is remarkably well-judged, as Wheatley – alongside regular writing partner Amy Jump – feed potential disruptions to the viewer, and while everything appears to be going smoothly, we’re always aware of the seemingly inevitable eruption. The dialogue is witty, it’s pulpy, there are shades of Tarantino and a smattering of Guy Ritchie – but then the pay-off arrives, and the shoot-out commences, and here’s where the problems lie. For it all happens far too soon, and Wheatley struggles to then maintain the viewer’s full investment, as the narrative has nowhere else to truly turn. Tedium kicks in, and we long for the opening act, where an intensity was prevalent, as the second the guns come out, it becomes too generic. Where else can a story go when you’re dealing with several people shooting at one another in a warehouse? For a final scene it’s perfectly engaging, but for an entire hour it’s a challenge to sustain.

The film does represent a rather more comedically inclined picture for Wheatley though, albeit spiked with his distinctively dark sensibilities as a filmmaker. Copley is blessed with the majority of the film’s funniest moments, and the sheer eccentricity of the performer illuminates the screen. Yet the one thing that you can’t help but take away from the cinema as you leave is the deafening sound of gunshots ringing in your ears, as a truly uncompromising, brutal feature that offers no respite. Oh, that and John Denver, who you’ll probably never listen to in quite the same way again.

Sienna Guillory on A Banquet, peas as a gateway food & working with Ben Wheatley again for The Meg 2: The Trench