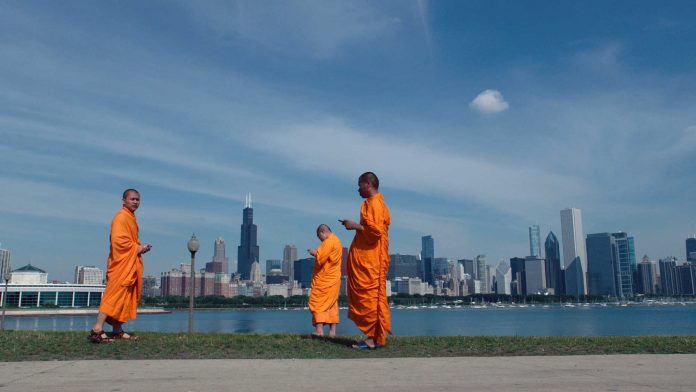 While immersed in the latest endeavour from the venerable documentarian Werner Herzog, a really irritating man sat next to me flicking through his phone throughout. As the harsh light that emanated from his Apple device shone in my face, it felt almost fitting this was occurring, for Lo and Behold, Reveries of the Connected World examines our ever changing relationship with the internet, and the sorry state to my left was a sad indictment of modern society, unable to just concentrate on something without distraction – which Herzog scrutinises over in this engaging production.

If you’re reading this review (lucky you) then you’ll be using the internet to do so, and Herzog casts his eye over the way in which the world communicates, and vitally, how it all began – in California, October 1969. We then catch up with responsible for creating the world wide web in the present day, to then explore how the internet has saved lives since its conception, and how it’s also destroyed them. From the way it has revolutionised cancer research, to meeting who are addicted to video games and porn, and the increasingly – and alarming – rise in online trolls. Herzog even looks into the future, and what else is yet to be achieved.

It’s incredibly easy to take for granted that the way we live has been so heavily informed, and dictated by a series of insanely intelligent people, as we’re so consumed by actually using the internet we forget where it came from – and the opening segment chronicling such events make for the most absorbing in this feature. The unadulterated joy at this newfound global system of computer networks takes a dark path, however, as any such marvelling at the sheer wonderment of the communicative device turns to apprehension and panic, at the threat and destruction, and the way it’s changed society – and not always for the better.

Herzog avoids taking a chronological approach however, as we skip from the 60s to the modern day and self-driving cars – and it feels as though we have skipped an entire period of time, but it’s such a vast topic and so all-encompassing that to fit it all in to a feature length film seems implausible, and Herzog must be commended for creating a documentary with a minimum contrivance in that regard, linear and structured to perfection. But then we hadn’t expected anything else from the German filmmaker, who also lends his indelible, droll wit to his endearingly abrasive narration.

The film also makes you perceive the elderly in a rather different light. Those we assume aren’t so technologically-savvy, we may pass in the street and wonder if they’ve ever even heard of Instagram – well, some of them created the whole damn thing, and it’s remarkable to see such innovators now at a much older age. They created the internet. I still don’t know how to defrost the freezer.