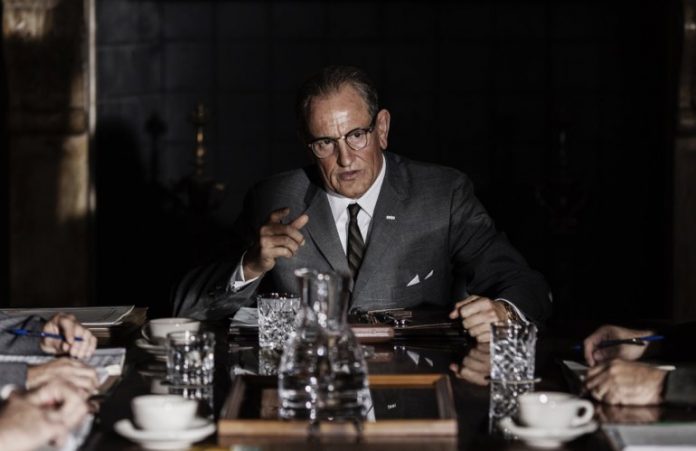 Lyndon B. Johnson, the former President of the United States has been depicted several times on screen in recent years. Liev Schreiber took on the part in The Butler, while Tom Wilkinson depicted the politician in Selma. More recently Bryan Cranston gave it his best shot in All the Way, and now, in Rob Reiner’s biopic of the head of state, the role belongs to Woody Harrelson – the most surprising of the collective, and yet undoubtedly the most entertaining.

Reiner sets his tale during the transitional period where LBJ became President in the wake of JFK’s (Jeffrey Donovan) death in 1963. We begin as the two go head to head, with the latter of course being elected into the White House – but then in a surprise turn of events, Johnson was hired to work as vice-President to the immensely popular leader, in spite of their contrasting ideals. So following the assassination, and with a nation fractured, it was left to Johnson to pick up the pieces, and while seeming to be the polar opposite of his predecessor, he sought to carry out JFK’s ambition to pass the Civil Rights Act, vying to win over a nation in desperate need of a boost.

Harrelson turns in a wonderfully hammy performance in the title role, bringing a certain warmth to the character (which somehow shines through, in spite of the rubbery, distracting face-mask the actor appears to be donning). It’s imperative this be the case too, as needless to say we need to be won round by this character as the narrative progresses, and Harrelson ensures it’s easily achievable. The supporting cast do their bit too, with Jennifer Jason Leigh impressing as the First Lady, Bird Johnson, though Donovan’s casting as JFK does appear to be more based on image over anything else, not quite standing up when opposite the engaging Harrelson.

Reiner takes a surprisingly playful, and comedically inclined approach to the feature too, which makes a change, albeit a potentially controversial one. But if you take J. Edgar, for instance, it felt so dull as we reached the latter stages, while also guilty of attempting to cover too much ground, expanding across decades, whereas LBJ stays within its means and focuses on a more succinct period of his presidency. In spite of the irreverence that exists, the film doesn’t compromise on the more profound, dramatic moments, remaining absorbing and finding a compatible balance between the two. Plus, injecting a sense of farcicality in a film surrounding American politics hardly seems out of place given the current set of events.

For a political biopic, LBJ is nice and short too, just surpassing the 90 minute mark, where this tale could easily have been told in well over two hours. Needless to say, had that been the case the distinctive approach may have grown somewhat tedious – but Reiner reigns it in, and the film is all the better for it.

How much does your survival depend on sleep? New trailer drops for Awake