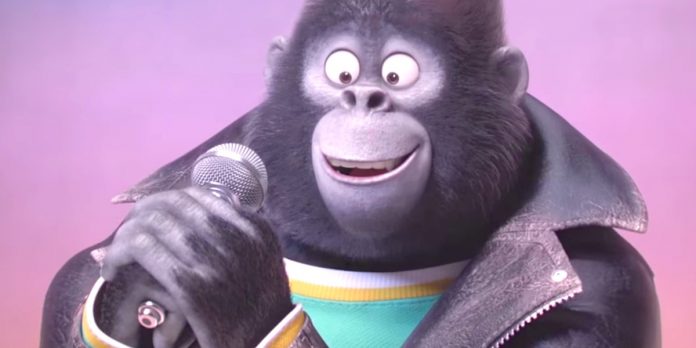 Buster Moon, an idealist koala bear and shady theatre owner (voiced by Matthew McConaughey), tells his best friend, and sheep, Eddie (John C. Reilly) he has this idea – to host a singing talent show for all the locals to take part in. It’s met with an underwhelming reaction, as Eddie claims it’s been done countless times before. And yet Buster Moon persists – so Garth Jennings’s Sing effectively acknowledges early on that it’s following a completely unoriginal formula, and yet carries on regardless. Lucky us.

That’s right, it’s talent show time in the land of animals, with Buster vying desperately to save his venue from closing down, hoping the event will be a riotous success and bring in lots of money he’s rather short on. However when his elderly assistant Ms. Crawl (an iguana voiced by Leslie Jones) accidentally mistypes the amount of the prize on the leaflets, adding a couple of zeros at the end, the queue around the block is staggering, as the likes of the gambling mouse Mike (Seth MacFarlane), punk-rocker porcupine Ash (Scarlett Johansson) and timid elephant Meena (Tori Kelly) pray for glory, as well as the beleaguered mother of many piglets, Rosita (Reese Witherspoon), and the gorilla Johnny (Taron Egerton) – who wants to carve a career for himself in music, and avoid following his father into prison. However, while they battle it out to be crowned the winner – Buster may just have to figure out exactly where he’s going to get his prize money from.

The lack of original songs is another sign of a film that simply feels somewhat lazy in its execution, not to mention the fact the use of modern music could see this film feel rather dated in a few years time. It’s so heavily informed by contemporary tracks, ranging from artists such as Katy Perry and Taylor Swift, it’s hard to imagine it will make for very watchable cinema in decades to come. Not that every film should be timeless, it’s not exactly easy to pull off – but in the animation genre the bar has been set so high in that regard, with Pixar productions in particular so adept at tapping in to perennial themes that can inspire generations to come, as films you can enjoy yourself as a child, and then look forward to watching again with your own offspring, but in order to do so you must have heart and meaning and Sing comes devoid of just that.

There are several moments littered around the narrative however which are really funny, thriving in small quirks of certain characters and cameos from supporting roles (like the farting buffalo), much like we experience in real life watching X Factor, where most of the enjoyment derives from the early stages and witnessing those who aren’t quite so talented. Jones steals the show as Ms. Crawl however, as the most consistently humorous character.

Sing is likely to be immensely popular, for it’s based on a triumphant talent show formula which guarantees millions of viewers tuning in each and every week, while performing songs that are watched, bought and downloaded by millions of fans – and this film is for them. But it still represents something of a quick fix, and those looking for a more compelling, heartfelt production may be left wanting. So for cynical reviewers (such as this one) it’s unlikely to hit the right notes, but should do for many others, and who can begrudge anyone that? Though think agreeing that Zootropolis (also set in a city of anthropomorphic animals) is the better film, is far more likely to be unanimous.