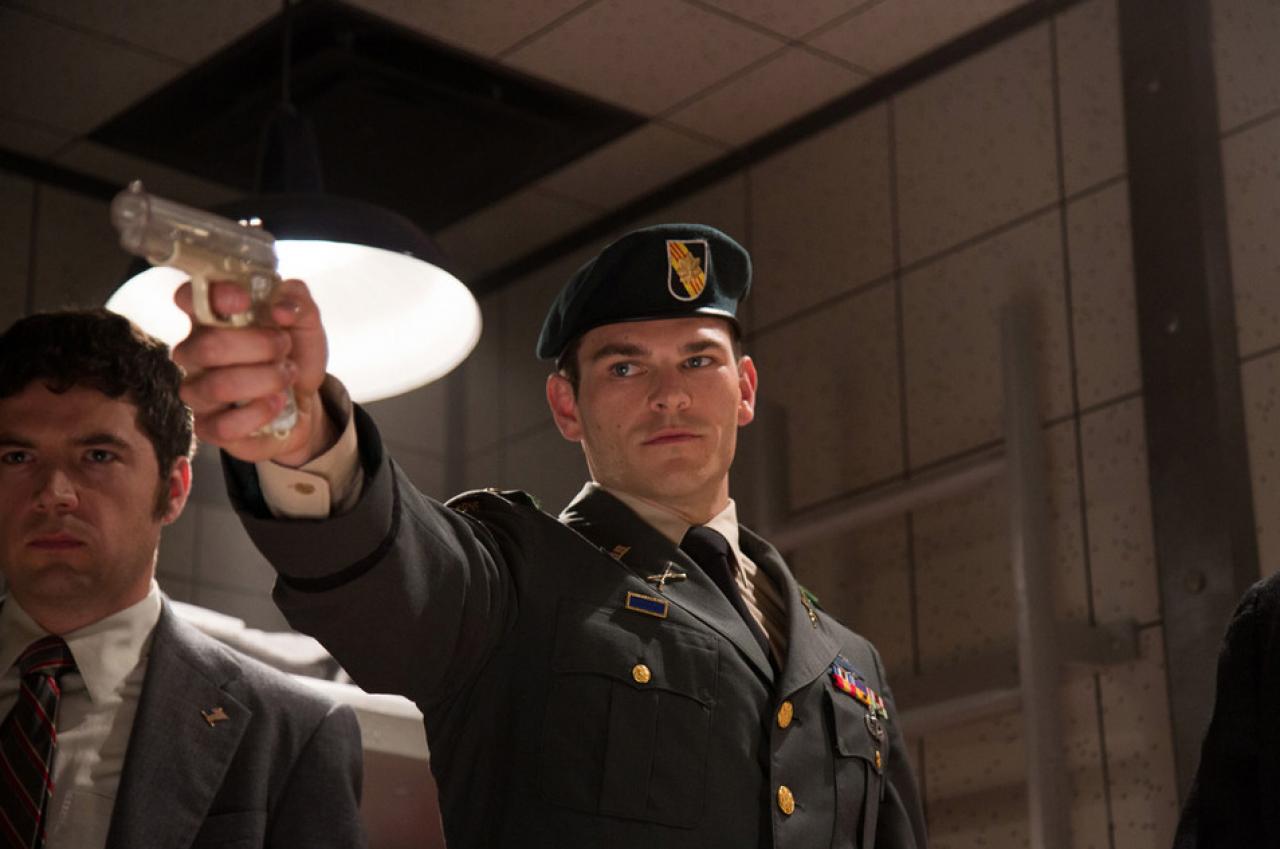 To coincide with the Home Entertainment release of X-MEN: Days of Future Past, HeyUGuys spoke with the new William Stryker, Josh Helman.

It is always fun speaking with an Aussie, as for each interview despite never having spoken before it instantly feels as though you have picked up the phone to speak with an old friend.

During the course of our conversation Helman reflected on his early influential encounters with film and performance that have shaped his career, to stepping onto set and making the transition from X-MEN fan to playing Wolverine’s antagonist, and the “inherent crossover between comic books and films.”

Why a career in acting? Was there that one inspirational moment?

Honestly, I have been in love with films ever since I was a wee lad, and so I just wanted to be a part of the process. I actually had designs on being a writer when I was in High School. The only two things I was good at was acting on the stage and writing for English class, and so when I graduated High School I thought I’d audition for one acting school, and if I got in I’d do that, and if not then I’d write books. It just so happened that much to my surprise as a then seventeen year old I was able to get into this acting school, and that has kind of been the course that my life has taken ever since. There was really nothing else I could have imagined myself doing, and I always feel that’s a good indication that you are doing something that you are meant to be.

The moment of realisation that films are created is an important moment in our relationship with films. Can you recall the point where you realised the experience films had on you were actually created by an entire team of people?

Well I think it was probably a combination of two different factors. I can’t remember the film, but I remember reading an interview with a director who said that he always liked it when audience members would stay through the credits, because it’s not just one person; there are an incredible amount of people that put together a film. I remember how the next film I went to see; I sat through the credits and was amazed by how many people worked on a film. I kind of make a point of it now, though much to the chagrin of my friends who want to go and get a drink or a bite to eat afterwards. But I like to sit through the credits as I feel it is a matter of respect.

Then being on set for the first time was the biggest eye opener. When you watch anything you only see what the camera sees; then suddenly you turn up on set and you see the entire universe that is around the camera making everything happen and work in a very precise order. It is really quite mind blowing. So I think the combination of both for me was what really tipped me off.

You’ve spoken of being a fan of comic books, but going from the audience seat to starring in a comic book movie to play a character like Stryker, how does that change your perspective of the films?

It’s kind of surreal actually because I have been a fan of the films ever since X-MEN came out in 2000, which I went to see at the cinema and was absolutely blown away by. It was amazing, and every time Brian has been a part of these films it has been an incredible and well told story. Then to suddenly be in the position of walking onto the set where I saw the Xavier mansion set; the vehicles involved, and suddenly it’s all this iconography you grew up with and you are within spitting distance of it. So it is really surreal and to just be able to walk on set and play with these people to help tell a story you were familiar with from the other side of it all was a crazy experience. I wouldn’t trade it for the world.

When you finally sat down in front of the completed product despite your knowledge and awareness did the film still have that impact?

Absolutely! Simon Kinberg wrote what I think is just a fabulous script, and it was clear from reading it that it was a great blue print. So automatically you have an idea of what it is going to look like, and what the experience is going to be like off the page. Then suddenly you see it all come together, and for me the sequence in the kitchen in the Pentagon was just a triumph of music, sound and visual effects. The acting in it and the direction was also brilliant, and a scene like that comes to life when you have a much deeper respect for everyone who’s involved in it.

Film could be perceived as an offshoot of literature, and comic books themselves comprise an interesting part of the discussion of film and adaptation. What are your thoughts on cinema being described as an offshoot of the written word or stories off the page?

One of the points that is always brought up about literature is that you can spend an entire book or even series of books inside a person’s mind, where they narrate the psychology of their character to you. This is something you can’t do to a degree in film, although obviously the structure of storytelling as carried over from literature into films. There is something about comic books that are visual in nature and tell their stories in a specific way. The way that they construct their stories, and present them on the page is more similar to the cinematic form than literature, and so I think there is an inherent crossover that happens between comic books and films. I think this is why in many cases we have these fabulous films adapted from comics, because the way in which they tell stories, present characters and characterisation are very much in line with the cinematic form.

When you have the opportunity to play a character such as Stryker that you have encountered from the other side of the screen, how does that impact your perspective of him?

As an actor jumping into a character the process is always interesting. For me at least understanding the psychology of the character is everything. You never really get the opportunity to explore that for yourself until you find yourself playing someone. So the process for me having obviously seen the iterations of Stryker through Danny Huston and Brian Cox’s performances meant it was interesting to then come to the character as an actor, and find out what you might have to offer.

The way that the character was presented in Days of Future Past was very secretive, with a sense of not knowing who this character is; so much so that in the original script it was supposed to be a revelation in the final scene that he was actually Stryker. I hope we get the opportunity to delve into him more deeply, because I feel that a lot of the character in the way that he was presented in Days of Future Past is enigmatic. You are really not supposed to know who he is or what he’s about, and so the opportunity to answer those questions is particularly exciting.

Without giving any spoilers away, one of the most interesting moments in the film is the closing montage and voiceover; specifically that shot of you and how the narration applies to you. You’ve spoken of wanting to explore the character more fully, and in Days of Future Past Stryker’s connection with morality, fate and the future is particularly interesting.

I know that I have to tread carefully in the answer to this question, but I think the intriguing part is obviously as an audience member knowing the story from the previous films, and obviously the comics. Stryker is such a huge part of Wolverine’s story, and I think that what is interesting now is seeing how the events of Days of Future Past may change the trajectory that both Stryker and Wolverine are on. I’m very interested to see the direction that story takes, and what other revelations or developments we are going to find that may differ from what previously occurred.

X-Men: Days of Future Past is out now on Digital HD, 3D Blu-ray, Blu-ray and DVD from Twentieth Century Fox Home Entertainment