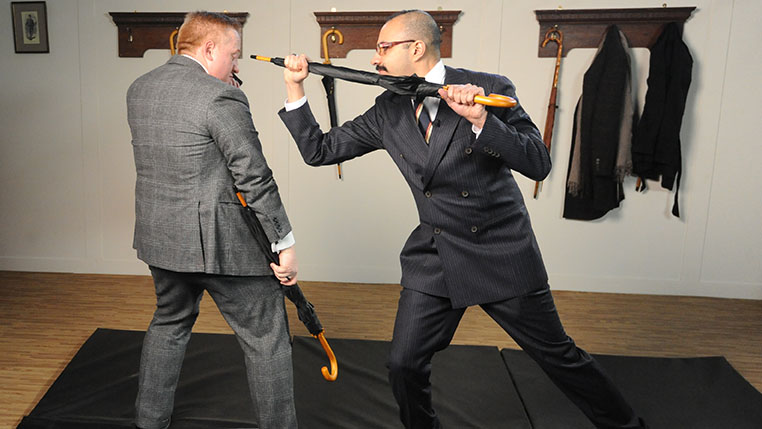 This week sees the release of Matthew Vaughn’s latest film Kingsman: The Secret Service. The story follows Gary ‘Eggsy’ Unwin, who comes from the mean streets of London but ends up being part of a team of elite spies intent on saving the world.

The transformation of Eggsy is a crucial part of the film, and Taron Egerton in the lead role makes it look easy. We see him learn the tricks of the trade and battle bad guys just like his suave and sophisticated mentor Harry Hart (Colin Firth).

But can anybody become a Kingsman? I headed off to the Kingsman academy to give them their greatest challenge yet…

So I lost the beard and ended up with a rather fetching piece of facial furniture. I felt good, if a little naked. Next up was the suit. Now as you all know, a Kingsman doesn’t just throw on any old rags, he needs to look the part at all times. As such, I visited one of London’s finest tailors to get my bespoke suit made.

Just as in the film, this was a first for me. I put on a regular off the rail number, which looked pretty good in itself, but that’s not good enough for this situation. John, the tailor, decided to pull out all the stops and give me an outfit that wouldn’t look out of place on Savile Row.

Once that was done, I headed off for fight training. In the movie, Harry defeats a group of ne’er-do-wells with nothing more than his umbrella. It’s all based on a genuine martial art made popular in the bars of London around the turn on the century. History lesson over… now lets all gawp at me trying hard not to look like Borat.

Here’s our other Kingsman: The Secret Service coverage including