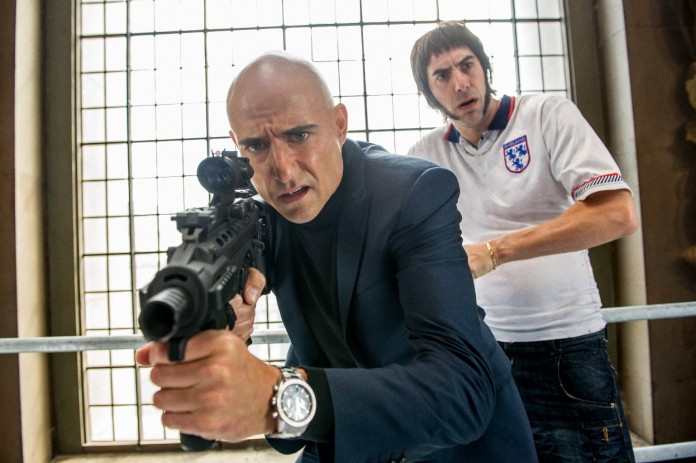 For one of the most creative, resourceful comedic talents this nation has ever produced, pushing the boundaries with outrageous, barbed, and yet such intelligent satire, to see Sacha Baron Cohen present a spy movie spoof as his latest endeavour feels like all too easy territory for such an innovative mind. Grimsby is, however, recognisably shocking, and there does remain a pointed satirical undercurrent, but this revels far more predominantly in the former, not nearly as clever a piece as his previous offerings. But it goes so far in the direction of irreverence, that any attempt to be profound would be distinctly counter-productive.

Cohen plays Nobby, a loutish, uncouth, irresponsible father of nine. Spending his days drinking down the local, he dreams of being reunited with his long-lost brother, who he had abandoned when just a child. His brother, Sebastian (Mark Strong) was adopted and raised in London, and is now a feared secret agent – the polar opposite to his layabout sibling. But finally their paths cross when Nobby gets his hands on a free ticket to an event that promises free booze – where Sebastian has been deployed to take out a potential assassin.

Saving his reunion for exactly the wrong time, Nobby hugs his brother just when about to pull the trigger – and as such, the bullet accidentally flies into the shoulder of an ambassador of world peace – a child with Aids – and his blood then flies into the mouth of Daniel Radcliffe (played by a lookalike) and infects the Harry Potter star with the disease. “You’ve done in 2 minutes what Voldermort couldn’t in 8 movies” Sebastian shouts. So the fugitives are on the run, targets for the Government who believe they have deliberately sabotaged the operation – as Sebastian vies to hunt down the real assassin and help clear his own name. But with the perennially clumsy Nobby by his side, that’s not going to be as straightforward as he may have envisaged.

There’s a moment early on when we one of Nobby’s kids (the youngest, of just a few months) watching South Park. It’s no accident we’re seeing this particular show play on the telly, for Trey Parker and Matt Stone are the masters of being deliberately controversial and overstated, and yet always grounding their art with a consistent, socio-political message that is injected with a minimum contrivance. It’s what Cohen has built his own career on, but sadly failed to triumph in this time around. It’s a style that generally doesn’t work as well on the silver screen either, as the pertinent jokes about Donald Trump and Bill Cosby will be dated before too long, and cinema is rather unforgiving in that regard.

Though Cohen, alongside director Louis Leterrier, instead revel in the notion of absurdity, the intimate sequences, which are few and far between in this endeavour, work better than the generic action scenes, with tedious shoot outs that we’ve seen countless times before. Not to say that poignancy is exactly a prevalent theme, as a picture that is gloriously nonsensical and completely and utterly stupid, in the most endearing way possible.

If you think that seeing Mark Strong teabagging Sacha Baron Cohen, or the former taking a face full of elephant spunk is funny, then this one may just be for you. If that sounds completely unappealing, avoid at all costs. But bear in mind that this title is uncontrollably funny in parts, and works because the one person who would admit, most fervently, that this is irreverent, farcical cinema, is Cohen himself. If he took it seriously we may feel obliged to, but he doesn’t, one bit – and the film is all the better for it.