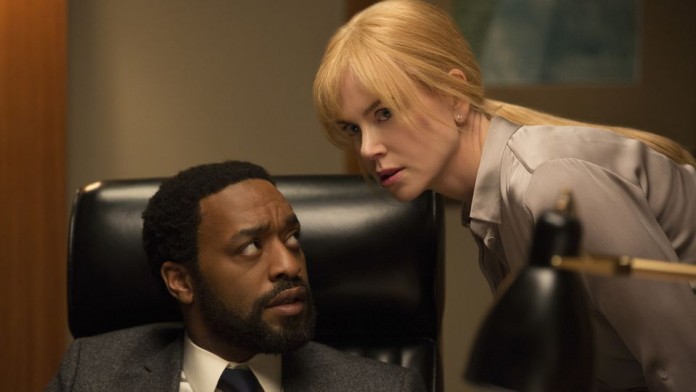 It’s not even been six years since the Argentine thriller The Secret in Their Eyes picked up the Academy Award for Best Foreign Language Film, and with a sense of inevitability about it, Billy Ray brings an immediate, Hollywood remake of the Juan José Campanella endeavour. When the news of this superfluous offering provoked a mere rolling of the eyes, regrettably any such apprehensions are vindicated during this experience, as the overwhelming sense of unoriginality lingers over proceedings like a dark, menacing cloud.

Chiwetel Ejiofor plays FBI Agent Ray Kasten, assigned to a counter-terrorism division, and is alerted when the body of a young female is discovered near a mosque he has been keeping tabs on. Heading over to the crime scene with his investigative partner Jess Cooper (Julia Roberts) the pair are shocked to discover that the body belongs to that of the latter’s only daughter. Fast forward 13 years and it appears that after having failed to convince the DA (Alfred Molina) to convict the suspected killer Marzin (Joe Cole) due to his affiliations with the force as an integral informant, Kasten has gone rogue, and decided to hunt down the criminal – now with a new, mysterious identity – of his own accord, and bring justice to one of his closest friends. But he has to convince the new DA, Claire (Nicole Kidman) to reopen the case, and in doing so, reopen and ignite the sexual tension between the pair.

The narrative itself is unique, as we’re presented with a detective thriller that abides by the tropes of the genre, except we know from the offset who the culprit is. Rather than thrive in the notion of ambiguity and follow the ‘whodunnit’ formula, this is not a tale of whether Marzin is innocent or not, it’s about tracking him down and ensuring he’s put behind bars – in spite of the law’s reluctance to do so.

The tale is well-structured as we move seamlessly between the past and the present day, watching our protagonist navigate his way around this complex case. Through flashbacks we build the case, picking up evidence along the way to further Kasten’s claims and fervent conviction that he has the right man. We’re always able to tell whether we’re dealing with the past or the present based on the colour of Ejiofor’s hair – as it’s considerably more grey during the latter, working as a subtle yet vital indicator.

In an attempt to justify this remake, the narrative has been altered to adapt to the new environment, as a tale steeped in American culture, with baseball and comic books used as a means of highlighting clues for catching the perpetrator, though it’s been implemented in an all too contrived fashion. So while absorbing in parts, here’s a picture that is rife with tedium and distinctively devoid of any palpable suspense or tension, simply not doing enough to warrant the retelling of this particular story.

Charlize Theron stars in trailer for ‘The Old Guard’