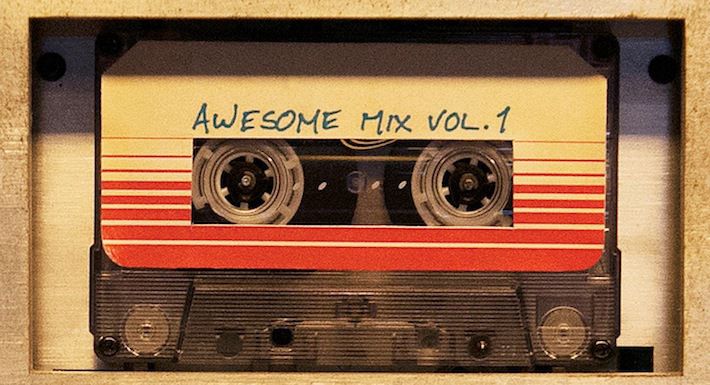 A great movie soundtrack is often responsible for that moment when you’re caught singing along unconsciously with various levels of embarrassment depending on the film – from Frozen to Dirty Dancing.

It’s an animalistic impulse we have all succumbed to a one point or another.

Disney have released both of the Guardians of the Galaxy soundtracks as a cassette, a move Star-Lord himself would no doubt approve of, we take a look at some soundtracks you can’t help but love. Some universally loved and others somewhat of a guilty pleasure we simply cannot deny.

With a political story playing upon reignited tensions between the Soviet Union and United States post-Cold War, what better way to accompany it with an emotional and blood pumping soundtrack befitting of the Rocky series?

Although this is the only of the Rocky soundtracks not to feature music from legendary composer, Bill Conti, it’s hard not to love what new recruit Vince DiCola was able to achieve with music from returning contributors Gladys Knight and Survivor.

From Robert Tepper’s No Easy Way Out to John Cafferty’s Hearts on Fire this is the quintessential 80s soundtrack. Then there is James Browns’ Living in America, which sees a cameo from the man himself as he performs before Apollo Creed’s ill-fated encounter with the Siberian Express, Ivan Drago.

Yes, it may not have the heartstring tugging power of the first two films but as the films evolved as did the soundtrack and fittingly so.

9) Scott Pilgrim vs The World

The music to this Edgar Wright gem is as ingenious and brilliant as the film itself.

Even the re-jigged Nintendo-esque Universal Pictures sequence at the start of the film is exquisite and really sets the tone with no detail left unturned. We have Sex Bob-Omb but also other fictional bands The Clash at Demonhead, who provide quite possible the best track of the film courtesy of real-life band, Metric. This alone makes it all too easy to get lost and wrapped up in the Scott Pilgrim universe.

The raw sound of Sex Bob-Omb themselves make it enjoyable enough even when you stray from focusing on music instead.

Like the film, the soundtrack very much reflects the fanciful story of boy meets girl.

Over the backdrop of the romance between Joseph Gordon-Levitt and Zooey Deschanel’s characters, there is the brilliant There Is A Light That Never Goes Out by The Smiths. Juxtapose this with the Hall & Oates insanely catchy You Make My Dreams and you have a soundtrack that’s as unconventional as the film.

Even the continental touch of Carli Bruni’s Quelqu’un M’a Dit is a wonderful track that is a good fit in the film. However, be warned as it may leave you in a perpetual state of frustration if you attempt to sing-a-long

If there’s ever a soundtrack that makes you feel as the character does in any one particular moment it is this; from feelings of sweet euphoria to the dumps of utter ruin with a silver lining lurking ahead.

Quite possibly beloved just as much as the film, the soundtrack to Drive has an unassuming presence that gives the film an unbelievable edge. An edge precious to some, particularly given the recent news…

Without tracks such as Kavinsky’s Nightcall and A Real Hero by College & Electric Youth to name but a few it’s hard to determine if the film is guaranteed to have the same feel and general impact.

There’s a subtlty to the soundtrack that makes it feel each piece of music belongs exactly where it is in the film, as though already seamlessly embedded deep in Nicholas Refn’s narrative. Especially as we see Ryan Gosling completely immersed in the role whose characters look goes well with the intermittent orchestral-type piece woven throughout the film.

Now that The Muppets are well and truly back, the follow-up to the 2011 sequel may lack in sentiment but makes up for it with musical routines from Ricky Gervais, Tina Fey and Ty Burrell.

From the get go there’s acknowledgement of doing a sequel, back by popular demand of course, in classic style of self-mockery with the opening track We’re Doing A Sequel. With the return of Bret McKenzie, it’s as though Flight of the Conchords was all leading to this point given how mind-blowingly well their satire and music fits with that of the style of The Muppets.

A Russian Kermit the Frog serenading Miss Piggy with I’ll Get You What You Want (Cockatoo in Malibu) goes so over the top that it comes full circle to almost make complete sense. Even Tina Fey’s number The Big House, accompanied with back-up singers including Danny Trejo and Ray Liotta, is pure genius with shades of Liz Lemon visible in the performance.

Great from start to finish, there’s not one track that you’d think about skipping.

With Heath Ledger starring alongside Joseph Gordon-Levitt and Julia Stiles, what better reason could there be to watch 10 Things I Hate About You?

That’s right – the soundtrack. It packs just as much attitude as Stiles as a stroppy high-school teen. Perhaps an unusual choice but with a soundtrack as good as it is, it’s hard not to love and maybe falls into the category of being somewhat of a guilty pleasure.

It is filled with a mix of 90s Ska and indie-rock in a kind of early Greenday meets Reel Big Fish sort of way. Even the late Heath Ledger features on the soundtrack during his rendition of Bob Crowe’s Can’t Take My Eyes Off You.

This along with Letters To Cleo’s I Want You To Want Me and Save Ferris’ I Know just makes for great listening.

An ultimate 90s teen love angst soundtrack of its time but still great to listen to time and time again.

Any soundtrack featuring Ellen Albertini Dow singing The Sugarhill Gang’s Rapper’s Delight and Alexis Arquette covering Do You Really Want To Hurt Me is one to truly behold.

This 80s throwback featuring Adam Sandler and Drew Barrymore is without a doubt one of the best films of the 90s. As enjoyable as it is to hear Steve Buscemi’s version of Spandau Ballet’s True, amongst other great moments, it is a film that completely embraces the decade it is portraying.

There’s The Smiths, The Presidents of the United States, Psychedelic Fur, Musical Youth and cameo from 80s icon Billy Idol.

An already great soundtrack is made even better by Adam Sandler himself who covers Dead or Alive’s You Spin Me Right Round but also serenades Drew Barrymore on a plane with Grow Old With You, a piece which Sandler had written.

The film doesn’t take itself seriously nor does the soundtrack and that’s why it is an essential part of anyone’s music collection.

Randy Newman is one of the most recognisable names attached to the Toy Story trilogy as much as the actors themselves responsible for bringing Woody, Buzz and the rest of the gang to life almost two decades ago.

As charming as the countless critters in the Toy Story universe, throughout all three films the music has been there to match from small subtle instrumental pieces You’ve Got A Friend In Me and Strange Things. All of these combined factors suck you into the Toy Story world whether you like it or not.

No musical voice quite represents Toy Story as much as Newman’s but Sarah McClachan’s When She Loved Me in Toy Story 2 is apt and mesmerising.

As enjoyable as Newman’s We Belong Together is in Toy Story 3, it is without a shadow of doubt that it is the instrumental piece So Long at the end that steals the show. A piece of music capable of making anyone teary eyed as we said goodbye to the toys we embraced so much.

As with many films on this list the soundtrack to Silver Linings Playbook is integral to the film’s story itself. In this case that would be Stevie Wonder’s My Cherie Amour which acts as a trigger for Bradley Cooper’s Pat who is battling his demons.

There’s truly an eclectic sound to the film from Bob Dylan to Alt-J and Eagles of Death Metal.
Whilst varied the mix of sound is not to the detriment of the film. Even the mix compilation music that accompanies Pat and Tifffany’s dance routine is enjoyable and not out of place.

All crafted and beautifully put together by the great Danny Elfman it’s no surprise this is a must-buy along with the film itself.

1) Guardians of the Galaxy

Not only did Guardians of the Galaxy put itself in contention as one of the best Marvel films to date, but it also proved to have perhaps the best overall soundtrack which led to the great moment of a dancing baby Groot. A dancing tree, it must be said, which puts Tobey McGuire’s Spidey-strut to shame.

In the Marvel world their animated superheroes know how to move as does Chris Pratt’s Star-Lord. You may find yourself trying to emulate the smooth moves of Peter Quill, as this soundtrack is as out of this world as many of the alien compatriots we see in the film.

As space-age as the film is its soundtrack features songs from the 70s onwards including The Jackson 5, Marvin Gaye & Tammi Terrell and of course Blue Suede. The latter featuring in the Guardians of the Galaxy trailer and helped send excitement levels for the film into the stratosphere.

The film itself is immersive and the soundtrack adds to his tremendously.