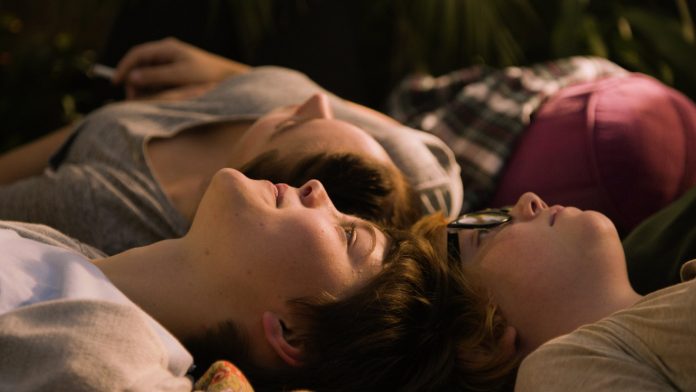 The objective of any film is to find and interact with an audience. Emerging from the safe embrace of its writer-director Alexandra-Therese Keining, Girls Lost (Pojkarna) offers this early bold statement of intent: “If you’re blind to what is different, this story is not for you. But if your eyes are open, you should listen carefully.” Wearing its heart on its sleeve, Keining’s film takes the bold step not only to introduce itself as a thematically driven film, but to dismiss the passive audience – the film seemingly consciously aware of an audience lost.

Adapted from Jessica Schiefauer’s fantasy novel, the story follows the adolescent adventure of three girls, Kim (Tuva Jagell), Bella (Wilma Holméngender) and Momo (Alexander Gustavsson), who discover a nectar that allows them to transpose their girlhood for a boyhood experience of adolescence. The fantastical and dramatic momentary escape at the heart of the story takes the form of a reflective heartache of cruelty, the struggle to belong and to find peace with oneself – the film beating with an emotional and thematic strong pulse.

With Girls Lost, Keining creates what is perhaps an inevitable bond between her film and the filmic medium. When we consider the narrative convenience of cinema or storytelling, itself a form of escapism from reality, it forms an intimate bond with the film, which itself is centred upon escaping ones predetermined nature. But just as Kim, Bella and Momo are forced to confront the truth of their reality, we the audience share a similar experience with cinema, which itself emerges out of the real world, from a human place, to where we must always return. Girls Lost could therein be aptly described as a meditation on the nature of escapism within storytelling, connecting us to our human relationship to fantasy and escapism through narrative invention.

While literature is the psychological medium, permitting us entry into the mind of the characters, cinema is the voyeuristic medium, where the bond with a character is forged externally. We watch their actions and listen to their words, piecing together their identity that then permits us to create that all-important bond. Yet here, this voyeuristic act and growing familiarity with Kim, the central protagonist has its limitations. Relying heavily on our life experiences, the film has the potential to divide its audience between those that will respond with sympathy, and those that will respond with empathy. For the former, the victimised Kim who struggles with her gender will stimulate feelings of sympathy, while for the latter, empathy will likely be sparked by an understanding of human cruelty alongside the struggle to belong. Of course this is not an unique occurrence within cinema, but it is integral to how we understand this film in particular.

These issues aside, Keining’s responsibility is to employ the cinematic language to create a coherent film around which she can create a discussion for those whose eyes are open to what is different. The themes at the heart of the film are an invaluable support, but equally pose a challenge of incorporating them in a coherent manner. Girls Lost is maturely executed, offering a discussion that presents us with ideas that cannot be considered in haste, the post-contemplation of the film necessary. Yet it is one that feels true to such complex themes of what it is to be human, an enigma that evades absolute understanding.

The experience of Girls Lost perhaps taps into the truth that understanding can only come through emotional experience, which is alien to words that we often use to express it. Keining has crafted a film that takes the form of a human communication through the experience of narrative fiction, connecting us more closely to human nature, but also the stark consideration that life is to be survived, as much as it is to be lived.