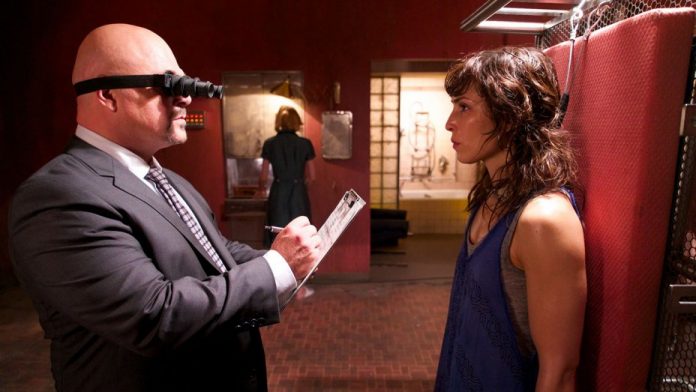 At its core, Steven Shainberg’s Rupture is a character study of an empathetic single mother, and requires an investment from the viewer to ensure they remain emotionally engaged, and absorbed by this complex narrative. Thankfully with a set-up that thrives in the mundane, introducing us to the lead in a slow-burning way, caught up in relatable, authentic circumstances, it means that when things get fucking weird, we’re already on board.

Noomi Rapace takes on the aforementioned role as Renee, struggling to make ends meet as she cares for her only child, Evan (Percy Hynes White), while having to put up with his father in the meantime. Dropping him off at her ex’s for the weekend, she is followed back, and eventually abducted. When she awakes she’s in a mysterious facility, being tested on, questioned by fervent doctors, and continuously having to take nondescript medication, not given any answers as to her whereabouts, or what it is they’re striving to achieve.

Rupture makes for an immersive cinematic experience, for the viewer is placed in exactly the same shoes as the protagonist, as we know absolutely nothing, much like Renee. This elusive thriller gives nothing away, and thrives in this very capacity. However it’s just a shame it couldn’t remain this way, for when we reach the latter stages and we demand answers to our questions, they’re nothing short of underwhelming, as without that sense of mystery we’re left with a flawed narrative, as the explanation to the protagonist’s predicament is unfulfilling and no match for what our own imaginations conjured up.

The one constant, however, is Rapace, who turns in an accomplished display – someone we root for throughout and sympathise with when on the back foot, and yet fully believe in as someone who can break free – we always hold out that hope she can make it out of this building alive, such is her unwavering determination and desire to see her son again. It’s the scenes when she is vying to escape that make for the most captivating too, turning in to something of a survival flick – and a pretty good one at that.

These sequences elicit the most amount of suspense, and Shainberg’s evidently influenced by the horror genre despite this falling more so into the thriller and science fiction categories – epitomised in how the wallpaper bears an uncanny similarity to the iconic pattern on the carpet that adorns the hotel floor in Kubrick’s The Shining. There’s also a vital sense of claustrophobia that derives from these scenes, which is somewhat more enjoyable than that sounds.

Noomi Rapace stars in trailer for ‘The Secrets We Keep’