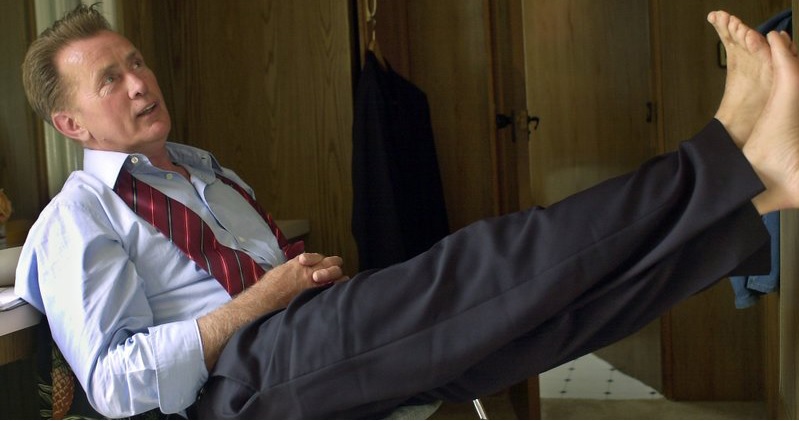 There have been countless memorable politicians in movies and TV shows over the years. They’ve ranged from kind-hearted American liberals, to ruthless schemers, no-nonsense action heroes. Before I began narrowing down the plethora of possible candidates though, I first needed to clarify who exactly qualified for the list.

I opted in the end to go purely for fictional politicians, meaning that unfortunately portrayals of real life figures, be they Abraham Lincoln or Richard Nixon, could not be included. I also spent a long period of time debating important issues such as whether or not Malcolm Tucker was actually a politician of sorts and weighing up just how many West Wing characters it would be acceptable to include (Matt Santos, you bed-breaking hero, you were so close).

In the end though, these are the standout fictional politicians who made the most memorable impact.

It’s no big surprise that at least one character on this list is a creation of the great Armando Iannucci. The brilliant writer behind The Thick of It and In The Loop has set the standard for political satire in recent years and one of his finest creations comes in the form of Julia Louis-Dreyfus’ Vice President Selina Meyer.

Louis-Dreyfus is perfect for the role, consistently hilarious and endearing despite moments of great ineptitude and a potty mouth to rival even Malcom Tucker himself. Meyer swings from being overwhelmed and largely ignored in the first season to becoming a serious political player as the seasons roll on.

As with much of Iannucci’s work, the prominent flaws on display may be slightly exaggerated, but you can’t shake the feeling that it still comes worryingly close to real life.

7) President Muffley – Dr Strangelove or: How I Learned to Stop Worrying and Love the Bomb

Merkin Muffleymay well be the straightest role out of the three which Peter Sellers delivered in Kubrick’s masterpiece, but it is still a performance that delivered some unforgettable moments.

Amidst the chaos and anarchy of the impending nuclear crisis that engulfs the film, Muffley tries in vain to maintain some form of order. Along the way we get to witness his exasperated phone calls with the Russian Premier (“Well, let me finish, Dmitri”), and he also gets one of the finest lines in movie history when he is forced to remind his colleagues, “Gentlemen, you can’t fight in here! This is the War Room.”

That one gem alone is practically enough to warrant a place on this list.

The trials and tribulations of Rt Hon Jim Hacker MP may be on a slightly smaller scale than other entries on this list, but few can match him for sheer comedy value.

Played expertly by the great Paul Eddington, Jim starts out at the fictional Department for Administrative Affairs and spends most of his time fighting the red tape put in place by Nigel Hawthorne’s scheming Permanent Undersecretary, Humphrey Appleby.

Over the course of 38 episodes he pits wits with Humphrey on all manner of pressing issues, including of course the unavoidable fact that he only attended LSE. Despite being prone to slipping into the odd pompous Churchillian speech, Hacker is at heart a good natured soul who always tries to do what is right, unless it means angering the PM of course, then it’s a different story all together.

Harrison Ford’s President Marshall successfully blurs the lines between regular Commander in Chief and all out action-hero. Marshall takes the rather irresponsible decision to forgo his duty as President and duly escape when the chance arises, and instead decides to take direct action. His bold move to stay aboard the titular plan is driven by the fact that Gary Oldman’s Ivan Korshunovand his terrorist buddies seize control and threaten to start offing hostages unless a rebel leader is released. Luckily Marshall happens to be a former USAF helicopter pilot, a Vietnam War veteran and the recipient of the Medal of Honour. As a result, asses are kicked, names are taken and one-liners are doled out with Presidential precision.

Bill Pullman’s President Whitmore isn’t really at all to blame for the alien invasion that befalls the world during ID4, though he does arguably fail to evacuate the cities in time, and definitely takes far too long to fire that snivelling Secretary of Defence.

However, despite his flaws, he will never be forgotten thanks to that impassioned rallying cry to an airfield of beleaguered pilots (including some of the best over-acting extras of all time). He may be emphatically on the cheesy side, but you can’t deny the fact that he takes to the air and does his bit to stop the alien threat.

Capra’s portrayal of the US Congress as being rife with corruption might not have sat well with the government of the time, but the director’s classic movie still stirs the spirit to this day and reinforces his unshaking belief in the decency of the common man.

Jimmy Stewart’s Jefferson Smith is the common man in question, a regular Joe who becomes Senator almost by accident. The corrupt nature of Washington politics almost breaks him, but he keeps his honour to the last and never gives up when less noble colleagues seek to drag him down.

Above all else, he reinforces that most Capra-esque sentiment, the ability of one man to make a difference in the crazy world of ours.

Essentially the anti-Bartlet; Frank Underwood may be a devious and manipulative sonofabitch, but that doesn’t mean he isn’t effective. Frank represents the dark heart of politics laid bare.

Where some politicians on this list can legitimately claim to be acting for the people, Frank is out for himself and nobody else. His actions so far have ranged from the underhand to the downright morally deplorable, and yet somehow you still can’t help but find yourself rooting for him. He’s a charming and absorbing presence and his ascent to power is unavoidably impressive.

Kevin Spacey delivers a masterclass in character acting, as every glance and speech to the camera does nothing but lure us into his web of deceit further.

There was only ever once choice for number one here, Josiah Edward Bartlet, two term Democratic President and yardstick by which all real life American Presidents will be forever measured.

Fiercely intelligent and driven by a genuine desire to make lives better, Bartlet is the type of self-confessed bleeding heart liberal we all wish got a shot to run the United States. He is not without his flaws, ordering hits on foreign dignitaries is morally iffy regardless of their own actions, but for the most part he is a noble man whose wise head nearly always prevails.

Whether he’s schooling his underlings over two simultaneous games of chess, inspiring the masses with his legendary oratory skills, or physically marching down to Congress to try and break a deadlock, no other fictional politician makes you long for their existence like Jed.

Martin Sheen brings an innate likeability and warmth to the role, creating a character who is capable of switching from being a loveable oaf to an intimidating leader in the blink of an eye.