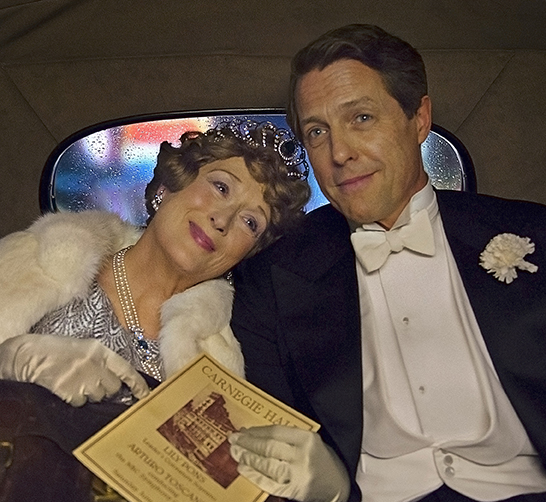 Every year, when the monotonous, tedious TV talent shows begin, they’re always somewhat absorbing in the opening stages. When the wheat have been separated from the chaff and only those who genuinely have ability remain, it makes for dull viewing – but early on there’s a magnetism of sorts, as we become beguiled by those who have no talent, and yet bravely – and in most cases, stupidly – stand in from of millions, and sing. It appeals to our imaginations, and hearts, as we become endeared to those who are specialists at failure – similarly to how we felt with the recent Eddie the Eagle biopic, as we watch certain individuals fulfil fantasies on our behalf. This perennial attraction to the underdog is most evident with Florence Foster Jenkins, the seminal symbol of musical failure – and yet we loved her.

Stephen Frears brings her story to the silver screen – where she completely deserves to be – stepping into her fantasy towards the end of her life. Meryl Streep takes on the eponymous protagonist, married to the doting, compassionate actor St Clair Bayfield (Hugh Grant). Their somewhat plutonic kinship vindicates the latter’s affair with Kathleen (Rebecca Ferguson), and yet he remains a loyal husband, supportive of Florence’s dreams of becoming a renowned opera singer. The problem is, she has a distinctively bad singing voice, and what’s worse, is that she remains completely unaware of this fact. But her enthusiasm and quirky demeanour earns the support of her friends – and new piano player Cosme McMoon (Simon Helberg), who ensure she remains gloriously oblivious to the criticism and laugher aimed in her direction. But when she professes her desire to play at the respectable venue Carnegie Hall – it may be a difficult secret to keep under wraps.

Emblematic of a Florence Foster Jenkins performance, there is a much laughter to be had during this endeavour, and yet the production remains spiked by a profound sense of sadness, which runs deep throughout this tale. Frears has displayed an aptitude for finding a compatible balance between comedy and pathos before, and this is no different. For there remains a sense of gratification too, as the kindness of the human spirit shines through – in how so many were willing to allow this woman to play out this fantasy, and let her have her moment. Of course there were many who would callously poke fun at the singer, but even they would maintain a sense of admiration for her courage, rarely spiteful in their reactions, genuinely endeared to Florence. The film, in that regard, is enriched by the war-time setting, as a period of time where people needed a lift, and Florence Foster Jenkins was on hand to provide it. She may not have been in on the joke but she wanted to make people happy – and that she most certainly did.

Frears must also be commended for avoiding the traditional biopic ‘cradle to the grave’ structure, as we have zero flashbacks into the subject’s life. Instead, and not for the first time, the director uses somebody else as his entry point, allowing the viewer to peer into these events from an outside source, much like he did with Philomena or The Program. Frears also maintains the illusion for the viewer’s sake, keeping the audience away from the secret for a lengthy period of time – as it’s not until at least a third of the way in when we first hear Florence sing, if you can call it that. Until that moment we, much like the protagonist herself, are led to believe this is all for real.

Streep shines in the leading role, as expected, but Helberg can be accused of overacting somewhat as McMoon. However given the film is placed in a surrealist fantasy world of sorts, within Jenkins’ very own mind, it doesn’t feel particularly out of place. But the real star of this show is Grant, with one of his very finest career performances, and one that, had this been released later on in the year, could even be considered in awards season terms. Plus, to steal the show when acting opposite Meryl Streep is a commendation not many actors have been on the receiving end of.

“This is our chance to control the truth…” Mission: Impossible – Dead Reckoning teaser trailer drops