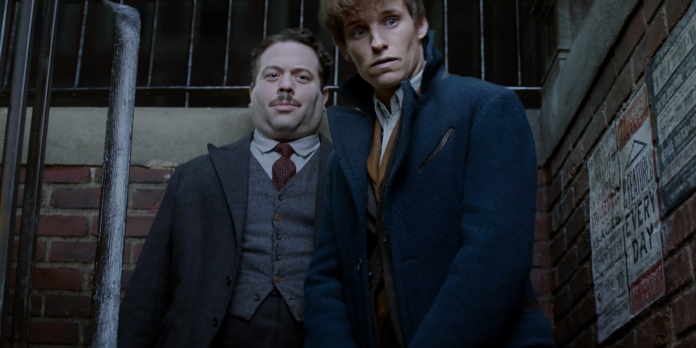 No matter if you wanted a new movie taking place in the familiar world of Harry Potter or not, when the opening credits appear in Fantastic Beasts and Where to Find Them, helmed by David Yates, and we hear the indelible, ineffably enchanting score associated to the much-loved franchise, it’s impossible to not get excited, as this production, penned by J.K. Rowling herself, is very much of this universe, albeit lacking that same unwavering sense of adventure.

Related: Win Merchandise from Fantastic Beasts and Where to Find Them here

The eponymous book this film is based upon was published back in 2001, purporting to be Harry’s very own copy, as a mandatory academic textbook that Hogwarts students were required to study. The author, Newt Scamander, is played here by Eddie Redmayne, a wizard arriving in New York in 1927, complete with a brown leather briefcase, which holds a collection of some of the most feared and rare species from within the magical kingdom. Though after an accidental swapping of cases with local baking enthusiast Jacob Kowalski (Dan Fogler), a small handful of the beasts escape.

Fantastic Beasts and Where to Find Them Video Review

With segregation policies in place between the wizard and the ‘No-Maj’ (the American term for Muggle) communities, if these creatures are spotted they could compromise the position of the former, and so this alerts the Magical Congress of the United States of America, and in particular officer Porpentina Goldstein (Katherine Waterston) and the uncompromising Percival Graves (Colin Farrell) as they seek to put an end to this perilous set of events, and ensure all the beasts return back to the briefcase, and Scamander behind bars – before it’s too late.

Though undoubtedly working as a standalone endeavour, one of the essential aspects of this film taking place in a world audience members know so well, is that it allows the narrative to begin from the offset, without that period of time usually needed to build up this new world and introduce us to a whole new set of rules for us to adhere to and understand. Instead we get stuck into the action right from the word go. We’ve had our disbelief suspended in this universe for years upon years, we’re ready to go on this ride without any palpable explanation.

That being said, there are occasional questions we have, and that’s where the character of Jacob Kowalski becomes so imperative, for he represents the viewer, he’s the ‘No-Maj’ bewildered by what he’s witnessing, querying what one earth is happening so we don’t have to, he’s endearing blissful in his naivety, and asks the questions that come from our lips. While Fogler turns in an impressive performance, Kowalski is the only real comedic output within this film, and though humorous on occasion, we require more moments of light-relief, lacking the myriad of eccentric supporting roles that would adorn the Potter productions.

What’s even more jarring is the lack of a true antagonist. Instead we have an elusive, unidentifiable presence causing havoc on the streets of New York, and while there are certainly positives that derive from this sense of mystery, we don’t have anybody to truly fear, a tangible being we can attach our anxiety too. In other words, we don’t have a Voldermort, and as proven in the Potter films, a hero really is only as strong as their adversary, and within this title it’s hard to figure out exactly who that may be.

In spite of the criticisms, Fantastic Beasts and Where to Find Them remains engaging, and the visual effects are mightily impressive, while some of the set-pieces are breathtaking and gloriously immersive. There’s also a rather pertinent study of US culture, for Scamander is somewhat taken aback by the strained relations between the wizards and the muggles, famed for having a harsh ruling between the two different cultures, segregating communities with a touch of scorn. But hey, at least America has progressed since the twent…. Oh.

The Banshees of Inisherin Review