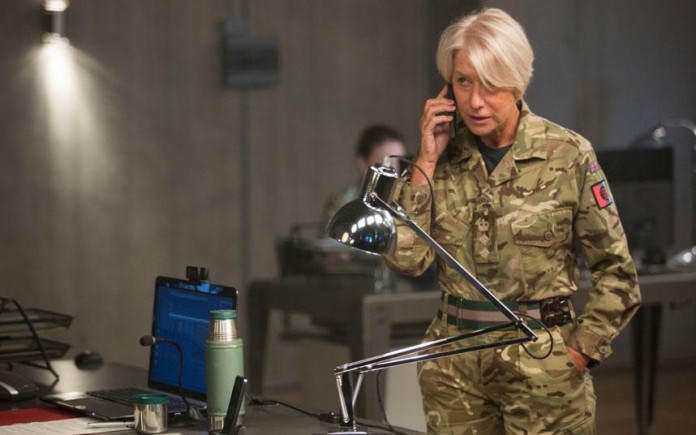 Gavin Hood’s Eye in the Sky is not the first film to have studiously scrutinised over the role of the pilots in charge of drones, dropping bombs and nullifying targets across the world during the war on terror. Good Kill, starring Ethan Hawke, was the other – but it’s this latest exploration that is the far more compelling, affective piece. Either way, it’s encouraging that filmmakers are tackling this pertinent theme, allowing us an insight into a murky area that we know exists, but aren’t quite sure of the mechanics in how it works.

Colonel Katherine Powell (Helen Mirren) is heading up an extensive mission to capture terrorists in the Kenyan capital of Nairobi, but when three of the five most wanted targets in East Africa find themselves in the same building, she realises that this mission to capture may just be more effective if it becomes a mission to kill. Though receiving the backing of Lieutenant General Frank Benson (Alan Rickman – in his final performance), the pair remain powerless as the ministers have to give the final word – and when a nine year old girl enters into the war-zone, they have to make a decision as to whether her life is worth risking, knowing that down the line several lives could be saved from eradicating the specified targets. As tensions mount, and the clock ticks down, a decision is needed – and it’s especially tough for Steve Watts (Aaron Paul); the pilot tasked with pulling the trigger.

Hood plays heavily on our moral compass, ensuring that an internal conflict takes place within us, as we become immersed and embroiled in this narrative. We’re placed in the same shoes as our protagonists, who (and Powell aside) all seem to be completely torn as to what decision should be made. Our emotional connection is enhanced by the humanisation of the character, with small, seemingly innocuous matters all working in crafting these roles. Be it Benson shopping for a toy doll for a young family member, or the Foreign Secretary (Iain Glen) having an upset stomach, and conducting hugely implicative decisions when on the toilet – this all works in forming that bond, and letting us know that these decisions, with so much at stake, fall on to the shoulders of people just like you and I.

Guy Hibbert’s screenplay should also be commended for remaining somewhat low-key, relatively speaking. Our characters are not attempting to put an end to a huge terrorist attack on the White House, or anything too cinematic of that nature – instead it’s just one girl’s life that is at stake, and even the targets are not the heads of ISIS, they are the fourth and fifth most wanted in East Africa. It’s these small details that ramp up the authenticity of the piece and ensure it’s a narrative we can get on board with. But the severity of the issue at hand is balanced well with the more farcical elements, with Dr. Strangelove a definite influence in that regard.

Hood is on hand to remind us, at every step, that we are dealing with a fictitious narrative, as the way the story is presented is hackneyed and generic in parts, playing up frustratingly to the tropes of the genre at hand. While the suspenseful nature is unwavering, the archetypal use of music is manipulative in parts, and points towards a film that while entertaining, is just not quite unique enough.