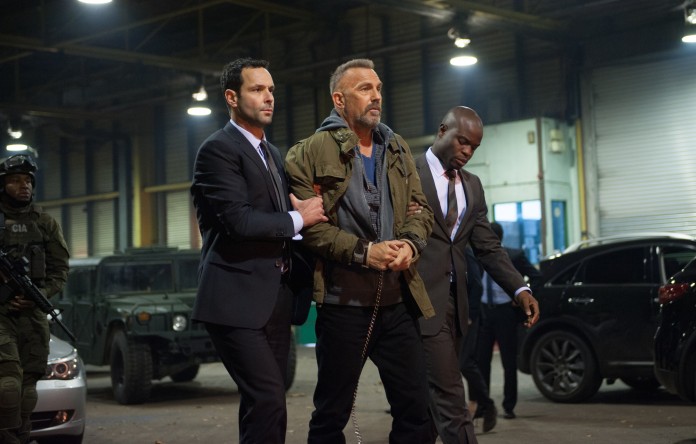 You can hire a collection of some of the world’s most dependable leading actors, throw them into a movie with an accomplished, dramatic director – and still come out with a turkey if the script doesn’t work. Criminal is a fine example of such an endeavour, as while assembling the likes of Kevin Costner, Ryan Reynolds, Gary Oldman and Gal Gadot – not to mention Tommy Lee Jones – the actors have been left with a convoluted, inane narrative to work with, that involves po-faced one-liners such as, “who punches in a patisserie”. A line that has accidentally become the new, “who throws a shoe?!”

Reynolds plays Bill Pope, a CIA agent who is murdered by the barbaric Hagbardaka Heimbahl (Jordi Molla) when on the job. As a highly valued colleague, Quaker Wells (Oldman) decides to use a new form of technology whereby they take the memories and skill-set of the deceased agent, and implant them into somebody new – and they opt for the volatile, threatening prisoner Jericho Stewart (Costner). Hoping he can now finish the job that Pope had started, the hardened criminal finds himself drawn to the former’s widowed wife (Gadot) as a complex amalgamation of his own memories and that of Pope’s start to mess with his head.

Though taking on the form of an archetypal antihero, with the intention of him being a reprehensible, hard-nosed character – for Jericho Stewart it feels like too much of an effort to form any emotional bond with the role, which is hugely detrimental to the viewer’s enjoyment. Plus, any potential redeeming qualities he may have don’t even belong to him. This forges quite a distance between the audience and the film, and you’d think to make up for the lack of a strong protagonist, we could at least be dealing with a formidable antagonist, and yet even that isn’t the case. Molla’s Heimbahl is a severely under-written character and isn’t menacing nor indestructible enough, as you never once doubt he’s there for the taking.

Costner doesn’t exactly bring his character to life either with a distinctly mediocre display. This feels like Costner’s Batman audition – he may come complete with a gravelly, deep voice, but there’s also a distinct lack of emotion, something which may serve our favourite caped superhero well, but doesn’t quite have the same impact within this particular endeavour, for this is vying to portray a mere mortal human, and we couldn’t be further from that.

Criminal has an over elaborate, complex narrative which quite simply doesn’t work, and if you were to survey it with a fine-tooth comb, there are countless flaws and holes within the story to scrutinise over. Plus, any film that features Piers Morgan in it instantly threatens the idea of losing a star – though in the case of this one-star production, that hasn’t even proved to be possible.

Gary Oldman stars in trailer for season 2 of ‘Slow Horses’