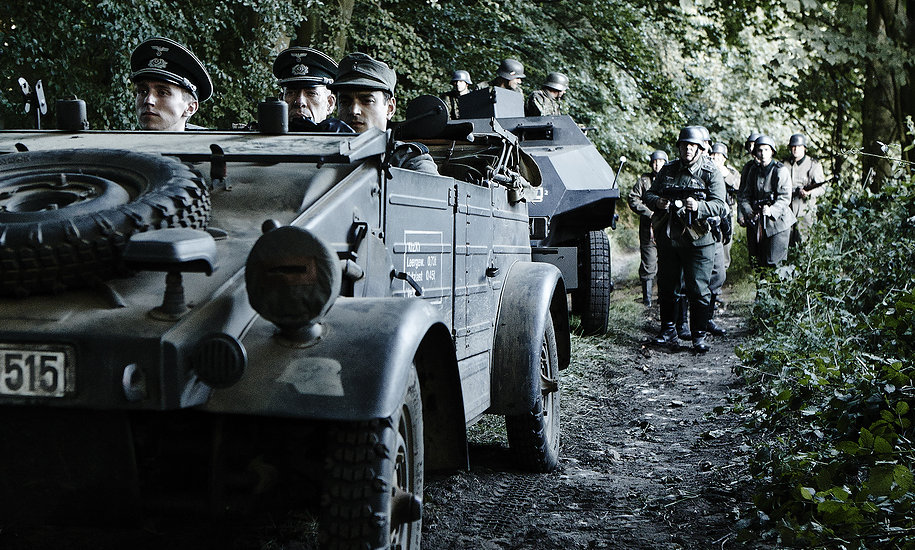 We’re very pleased to be able to bring you the first look at forthcoming WWII drama Allies, directed by Dominic Burns, featuring Julian Ovenden, Chris Reilly and Matt Willis. The film is set for release on the 1st of November.

Following a secret operation at the dog days of the Second World War, Allies does a perfect job of evoking the frail camaraderie endured by the allied forces. In particular the relationship between Ovenden and Reilly drives the story and presents a solid foundation on which Burns builds a thrilling film.

We’ve seen the film and it’s a very well told tale with a great central cast, some very tense set pieces and a tracking shot worthy of Scorsese. Watch out for more information when Allies nears its release.

Until then here’s what you came for – here’s the trailer, which has some NSFW words and action,

and the poster, click it to make it big.

August 1944 – two months after D-Day, the Allies are advancing across France.
A team of British and American commandos are dropped behind enemy lines on a secret mission to ambush a German Officer and steal maps charting the location of the enemy artillery along the front line. This vital intelligence could hold the key to ending the war quickly.
When the mission is compromised, the commandos must put aside their differences and fight their way back to the Allied front line.

Hot on their heels is an elite Panzer battalion, intent on capturing the soldiers and retrieving the stolen intelligence before they make it to safety.
Inspired by true events, ALLIES is an action-packed race for survival that sees a heroic band of brothers on a mission to end World War II.

Win Surviving Christmas with the Relatives on DVD