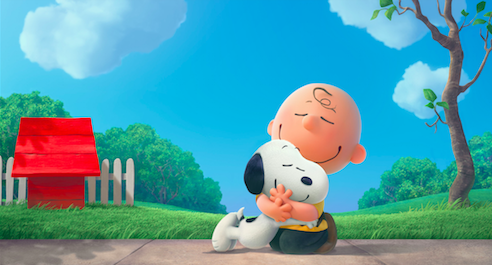 For a 65 year old, Charlie Brown is looking pretty good. Perhaps it’s the age-defying youthfulness that often accompanies bald men – Patrick Stewart, for example is actually 98 years old. Or it is the dateless, unshakeable bond that exists between a boy and his dog, or it could be the fact that the trials and tribulations that have bedevilled Charlie “Chuck” Brown are as relevant today as they were when he made his first appearance in several American newspapers in 1950.

One of life’s perpetual losers, Charlie Brown has been struggling all these years with failure, existential angst, crippling self-doubt, uselessness with the girls – especially little redhead ones – and a twinned inability to fly kites or kick footballs. Contained within the simple line-drawings of creator Charles M Schulz are all that it means to be human…and not have it go all your way.

It is Charlie Brown’s indefatigability in the face of certain crushing defeat, forever burning with hope right up to the final missed swing, that has helped him (along with his trusty pet dog, Snoopy) to become one of the great pop icons of American culture, second only to Mickey Mouse, to whom he provides an unsentimental, psychiatrically curious counterbalance: the Woody Allen to Mickey’s Danny Kaye – “My anxieties have anxieties.”  Could have been a line from Annie Hall.

Schulz’s Peanuts cartoon strip has been an American institution for half a century now. Its careful avoidance of changing technological advances means that it hasn’t dated at all; frozen in a subversive approximation of Rockwellian, Eisenhower-era America. Schulz’s combination of school-age innocence and adult philosophy has obsessed generations over the years, right up to the present day.

The comic strips were developed in the 1960s into phenomenally successful TV specials that are still repeated in the US to immense audience figures even now. There were also four feature films released, showcasing Charlie Brown and his pals, made between 1969 and 1980.

A huge hit Stateside, with $121m in the bank so far, the movie has introduced Charlie Brown and his pet pooch, plus Lucy, Linus, Schroeder, Peppermint Patty, Woodstock et al to the latest generation of Peanuts-nuts.  With its UK opening just around the corner, let’s take another look at their previous adventures on celluloid.

It might have been tempting, when upgrading the Peanuts show to the big screen, to broaden the canvas and upscale everything – Charlie Brown and Snoopy team up with Scooby Doo to repel an alien invasion – but refreshingly, director Bill Melendez stuck rigidly to an unbeatable formula, though Charlie Brown does get to leave town to compete in a televised spelling bee. (Does he win? What do you think?)

The film is a perfect introduction to the Peanuts-uninitiated, being a sort of greatest hits album of some of the most celebrated Charlie Brown imagery. Snoopy atop his kennel, the failed attempts to kick Lucy Van Pelt’s football, the trombone-voiced teachers, it’s all here. Lucy’s psychiatric advice centre (still only 5 cents a session!) is a highlight – “They say we learn more from losing than from winning” / “Then that must make me the smartest person in the world.”

However, there are some glorious cinematic flourishes that justify its place in the film guides. Schroeder’s kaleidoscopic Beethoven-inspired daydream is pure Fantasia, and Snoopy’s balletic ice-skating scene, set to Vince Guaraldi’s whimsical score is quietly wonderful. Pure class, Charlie Brown.

Although the second Peanuts movie is perfectly watchable, there is very little to qualify its status as a feature film. Moreover, its central story – Snoopy leaves home to be reunited with his previous owner, a sick little girl who is bedridden in hospital – veers awfully close to the sugary sentimentality that the Peanuts strip had always studiously avoided. There are shuddersome echoes of Tom & Jerry’s big screen travesty in 1992 when the feuding cat and mouse became pals and teamed up to help little orphan girl (for Pete’s sake!).

Much of the problem lies with the absence of Vince Guaraldi behind the piano keys. He was replaced here by Don Ralke along with new songs by Disney’s legendary tunesmiths, Richard and Robert Sherman, who in this case fell well short of their Mary Poppins high-point. It did exemplify just how important Guaraldi’s Dave Brubeck-style jazz scores were to the perfect vibe of Charlie Brown’s world. By the by, if anybody wants to start a new musical Christmas tradition in their household that doesn’t involve Slade or Cliff Richard, they should get their hands on Guaraldi’s score for TV Special, A Charlie Brown Christmas. As essential as eggnog, without the resultant nausea.

The musical shortcomings of Snoopy Come Home became a permanent problem in 1976 when Vince Guaraldi died suddenly at the absurdly young age of 47 – his own Charlie Brown music was played at his funeral. However, this third feature suitably ups its game after the previous film by placing the pint-sized suburban protagonists in hostile and unfamiliar territory – namely summer camp.

The suitably named Camp Remote provides everyone with the opportunity to rise to the occasion and showcase their unique traits. It even provides the gang with something new: antagonists, in the form of an evil, cheating version of their sweeter, happier selves. Even Snoopy has a nemesis in the form of a savage, pony-sized cat called Brutus. The rival gangs face off over several challenges including a climactic raft-race. Incidence-wise, this plays like Raiders of The Lost Ark compared to the two other movies.

Moreover, something about the colour palette, the sound design and Ed Bogas’s funk-lite score places it in the same magical aural space as Speak & Spell toy commercials and pre-Elmo Sesame Street shows.

The last big screen outing for Schulz’s little ‘uns until now saw Charlie Brown and his pals crossing the Atlantic as part of a French student exchange. A pared down cast means that characters like Lucy and Schroeder get left behind, to the film’s detriment. Whilst in France, they end up staying in an inhospitably rural château, and must solve a riddle involving Charlie Brown’s grandfather that dates back to the First World War.

Before they get to France, they make a stop-off in Merry Olde England, where the film’s pleasure’s spike, and in this movie the pleasures mostly involve Snoopy and his taste for the high life. He steals the show early on in the journey, booking his flight first class with Woodstock (hidden in the ashtray – the ashtray!  On a plane!) while Charlie Brown and the others have to fly “Tourist.” Whilst in London, Snoopy and Woodstock take in a game at the All England Lawn Tennis Club in Wimbledon.

Snoopy, it turns out, has the same relationship with a magnanimous temper as John McEnroe, and is kicked out for behaviour unbecoming of a gentleman…or even a beagle.