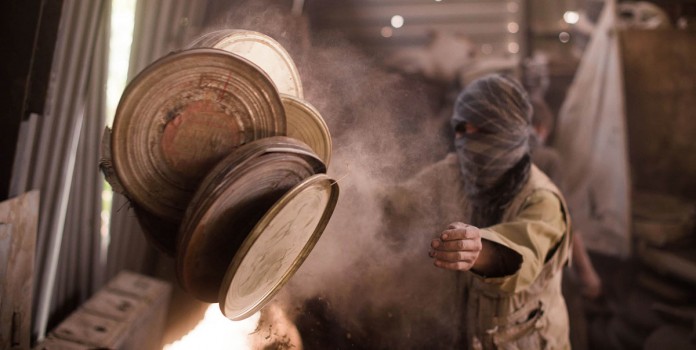 A Flickering Truth opens with a slow walk down a gloomy and cockroach-ridden corridor. Naturally, anticipating a somewhat unnerving story ahead, these cockroaches and cobwebs are subsequently juxtaposed with celluloid images; images that features a landscape and a striking woman. We swiftly learn that we are at the hands of a film lover; both on and off the screen, as we discover the true heritage of Afghan cinema.

This documentary follows Ibrahim Arify, the head of the Afghan Film Archive who returns to Kabul, Afghanistan in a bid to restore over 8,000 hours of lost film footage. Afghan film was initially lost as a result of the tumultuous Taliban regime, which believed cinema to part of a contentious Western culture. Arify fled to Germany years prior to his Kabul return after he was imprisoned under the Mujahideen authority during the Soviet war in Afghanistan. His return sparks much animosity – and rediscovery, as hours of lost footage is finally detected.

We follow Arify as he attempts to relocate and re-evaluate Afghanistan’s oldest features; discovering films like Land of Beauty and Hospitality and Love & Friendship – the country’s oldest, archived drama. We learn from Taliban hostages that they were forced to burn all celluloid throughout the 1990s and “watch the films bleed to the ground.”

One would assume that Arify would see his archives and rediscovery of cinema as a positive experience with thousands of feet of unprocessed film subsequently restored. However, he is constantly consumed with hostility and inflection throughout the film, accusing his peers of remaining ignorant. He even goes as far as antagonising his ageing Uncle Isaaq of being naïve for staying in the Afghan film offices; having built himself a home for the past 30 years. Arify justifies his antagonism by declaring that “people don’t respond if you ask them to do something nicely” and we never really get to the bottom of this, leaving you feeling somewhat uneasy throughout the remainder of the film.

A Flickering Truth is directed by New Zealand filmmaker Pietra Brettkelly whose previous work – The Art Star and the Sudanese Twins, and Beauty Will Save the World and Ends – screened at some of the world’s most prestigious film festivals including Sundance and Berlin. Her latest project played at both the Venice and Toronto Intentional Film Festival last year, introducing European audiences to the struggles and jeopardies that Afghan culture culminated, as well as almost 100 years of untold Afghan history.

Despite a rather unstructured and standstill approach, A Flickering Truth demonstrates the power and value of cinema. The documentary reminisces an almost Eastern approach to Giuseppe Tornatore’s Cinema Paradiso, reminding us that art is universal and therefore can never be relinquished.