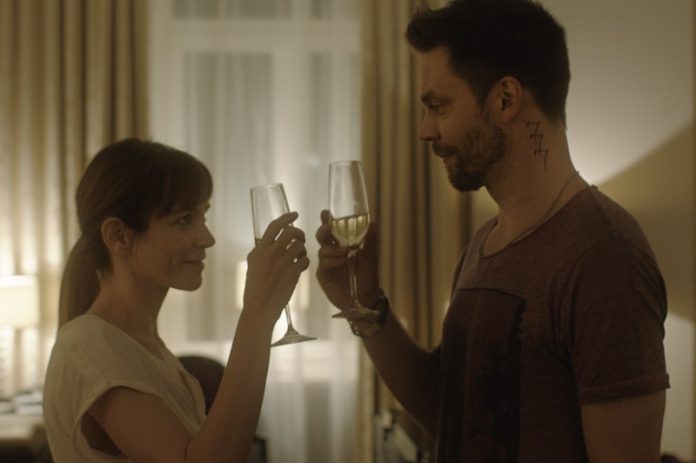 As French architect Caroline (Marie-Josee Croze) whiles away another evening in her hotel, she is approached by a Finnish DJ named Kaako (Mikko Nouslainen) at the bar. Despite the language barrier, they eke out a connection using video games and live music, ending up spending the night together as their unspoken romance blossoms.

The following morning, as Caroline prepares to return to Paris, secure in the knowledge that she will never see Kaako again, an Icelandic ash cloud strands them both in Lithuania. Having already checked out, Caroline has no choice but to spend another night with Kaako — something that neither of them are quite prepared for.

Cinema has long sensed the inherent romance of Europe, with its mingling cultures and seductive accents, and it has as a result served as the backdrop to a great many romantic dramas. Where better to break down the barriers between two people than a continent that doesn’t have any; a place where people are free to follow their hearts and settle down wherever they please?

Paris has long been known as the city of love, but filmmakers such as Richard Linklater and Woody Allen have shown time and again that the likes of Vienna and Barcelona are just as conducive to romance. Now Vilnius can be added to that list, thanks to director Mikko Kuparinen and his latest, 2 Nights Till Morning (2 Yötä Aamuun).

Croze and Nouslanen are effortlessly charming in the leading roles, each continuing to reveal new facets of their respective characters as the exchanges between them grow increasingly carefree and candid. At first insecure and secretive, dealing in half-truths and white lies, their early scenes together are an exercise in duplicity – Caroline spends their entire first meeting pretending she doesn’t speak English, their common language, to avoid giving anything too personal away – but as the pretense begins to fall away it becomes increasingly apparent that they are really only deceiving themselves.

This is no fairy tale romance, after all, and with reality just an e-mail or phone call away it isn’t long before their secrets are revealed. The world is now so small that it’s no longer possible to run away from your problems.

For 2 Nights Till Morning is more than a simple celebration of love; it is also an ode to travel itself. Caroline is in town working on designs for a new airport lounge, inspired in part by LAX’s recent attempts to forge stronger connections between passengers; Kaako is a touring musician who spends more time on the road than he does at home, eager to sell out as many venues as possible while he still has a paying audience to fill them. At the outset both characters take travel for granted – having spent so long doing it for business rather than pleasure they have forgotten what it means to travel for travel’s sake – but grounded in Lithuania together they begin to ruminate on the simple joy of losing yourself in unknown streets or the strange allure of anonymous hotel rooms, where you know that once you’ve checked out any trace that you were ever there will be washed, laundered and tidied away.

Like Jason Reitman’s Up In The Air or Sofia Coppola’s Lost In Translation, 2 Nights Till Morning doesn’t shy away from the more melancholy aspects of such a lifestyle, but the film is so achingly romantic that you can’t help but fall in love with Caroline and Kaako anyway. As the housekeepers ready the room for the next reservation, an act of unexpectedly stark iconoclasm, you realise you’ve invested in their relationship, too.