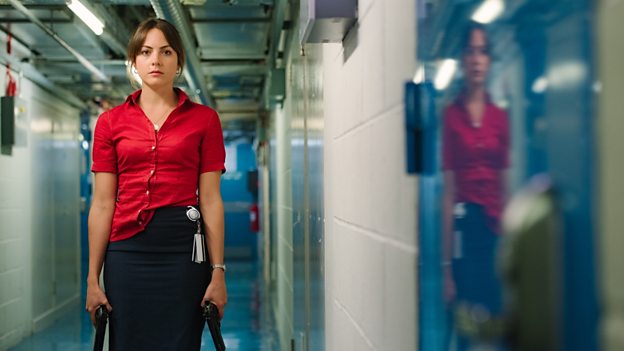 Identical daughters of a well-regarded Welsh author, archivists Ana (Catrin Stewart) and Nan (Stewart again) have done all they can to preserve her works at the National Library of Wales, where their mother’s ashes remain in storage following her apparent suicide. When a biographer arrives one evening looking to conduct research into Elana’s life, using the diaries and journals locked away with her ashes, he is settled in the vault while the sisters continue their work upstairs. Tonight, however, they’re distracted; their mother’s dying words seemed to identify the biographer, Eben, as her killer, and after taking care of the two on duty security guards they turn their twin attentions towards revenge.

What’s your favourite Welsh-language film? It’s a small and relatively obscure genre, even here in the British isles, but if The Library Suicides (Y Llyfrgell) is anything to go by it’s also one that deserves a great deal more attention than it currently enjoys. Directed by Wales’ own Euros Lyn, a veteran of television shows as diverse as Doctor Who, Cucumber and Marvel’s Daredevil, the film is a taught and twisty philosophical thriller that also serves as a touching treatise on memory and heritage. It’s about both how we remember our lives and how we want our lives to be remembered, as each twin struggles to reconcile their own grief with that of the other. It’s little wonder that they’re brought into conflict with her biographer, particularly as the books he presides over begin to challenge their understanding of the past.

Having achieved a certain cult status of her own with a recurring role on Doctor Who, Stuart takes on the twin roles of Ana and Nan, at first playing them as near-synchronised mirror images before letting the glass fracture and the widening fissure between them show. They may have arrived at their current plan together — hang Eben and make it look like another suicide — but as they each set about executing it and him their differing roles in the scheme lead them down divergent roads. Dan, a probationary night porter working a double shift, drives a further wedge between them, as his flirtatious nature and refusal to drink the drugged coffee cause complications that provoke drastically different reactions. Given the intensity of Stuart’s performance, the relative goofiness of Dyfan Dwyfor’s Dan provides some welcome respite, his uncomplicated characterisation working in stark contrast to the increasingly conflicted motivations of Ana and Nan.

Set almost entirely within the walls of the National Library of Wales, The Library Suicides makes full use of the spectacular and sprawling location. From its institutionalised lower levels to its rather more grandiose office spaces, it’s an incredibly versatile space within which the action is beautifully staged. The whole film exhibits a polish and style that sets it apart from the vast majority of low-budget British cinema, more likely to invoke Nordic noir than London grit, with the script too benefiting from not just precision but a certain slickness. It’s a complicated story, but writer Fflur Dafydd tells it with ease, as he fosters a deepening sense of intrigue before segueing seamlessly into the sort of mind-bending existential crisis that can barely limit itself to one revelation at a time. The ending might be a twist too far, but it’s still a thrill getting there.