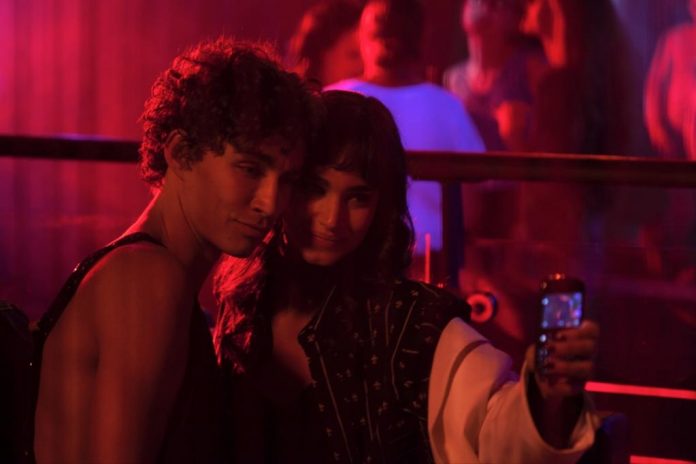 When ambitious bartender Lee (Robert Sheehan) seeks greater responsibility at Aqua, a spurious London nightclub run by Marlowe (Craig Parkinson), he finds himself embroiled in a people-trafficking ring. Suddenly fearful for his life, and for the safety of best friend Sol (Osy Ikhile), he decides that they must flee, the pair ultimately settling in Goa. While Sol has managed to save some money, however, Lee finds himself having to deal drugs on the side in order to survive. With one of them still insisting on living above the law they naturally find it difficult to lay low, and when Vix (Sofia Boutella), a woman from their past, tracks them down, they begin to worry that Marlowe won’t be far behind.

Simon Lewis, adapting his own novel for the big screen, has with the help of Dan M. Brown distilled his 1998 debut — Go, a popular thriller about and among backpackers — into a movie that features very little travelling at all. Split instead between just two locations, and opening with its protagonists already established in the latter, the film streamlines the novel’s narrative and seeks to trade more in suspense than outright thrills. Directed by Edinburgh’s own Charles Henri Belleville, Jet Trash is a taut and tantalising British gangster movie that, invigoratingly, exchanges the gritty backstreets of London for the glistening surf of Goa. Having already seemingly escaped, the stakes are exponentially higher.

It helps that Robert Sheehan — who, in a strange twist of fate, played a character named Simon Lewis in 2013’s The Mortal Instruments: City of Bones — shines in the lead role. In a genre often hamstrung by pathetic and contemptible protagonists its refreshing to spend time in the company of such a charismatic and compelling lead. Lee’s still conflicted, of course, not to mention compromised, it’s just that in choosing to ignore his shortcomings for as long as possible it makes him a much more appealing prospect. Sheehan has more range than he’s sometimes given credit for, however, and when the time comes for Lee to finally face his demons the resultant catharsis is both beautifully played and keenly felt. Of the three films the Misfits actor has brought to the Edinburgh International Film Festival over the last two years, Jet Trash is arguably the best showcase of his talents so far.

Unfortunately, there are elements of the film that don’t work quite so well — namely a curious and incongruous contrivance involving an ex-military monk (a decidedly offbeat turn by Finland’s Jasper Paakkonen). Further, there is something about the film’s portrayal of India that just doesn’t sit right. Even compared to a film such as Slumdog Millionaire — which, you might remember, ended in an elaborate faux-Bollywood song and dance number — Jet Trash’s treatment of its setting often feels reductive and incidental. There’s a scene involving a cow which, while perfectly well staged, feels completely out of place and is part of a wider tonal inconsistency that in such instances threatens to undermine the otherwise expertly handled tension. However, the film probably wouldn’t be called Jet Trash if the characters in it were valued members of society — the lack of attention afforded to Goa itself could well be a reflection of Lee’s own ignorance and egocentrism.

Set during the Christmas period, Jet Trash may fall short of Kiss Kiss Bang Bang levels of festive farce but it still manages to distinguish itself from the crowd – thanks in no small part to the fruitful and effective pairing of Belleville and Sheehan, and perhaps Lee’s lucky flip-flops. There might not be too much to unpack, sleek and stylish though the film is, but there’s nevertheless plenty to unwrap.