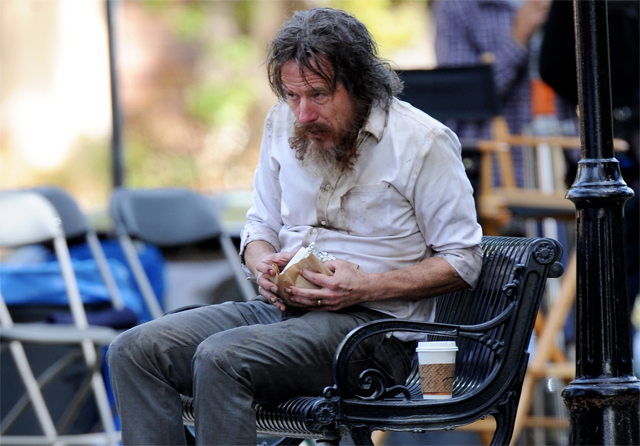 What would happen if we just disappeared for a while? Would we be missed? How would our family cope? Could we survive without modern technology, to live entirely off our own natural resources? To fantasise, almost perversely, over taking a step back and watching on as the world continues to revolve with you in it is not uncommon, and it’s the theme that lays the foundations for esteemed writer Robin Swicord’s first deviation into the world of direction, with the unforgettable drama Wakefield.

Bryan Cranston plays Howard Wakefield, who returns home from work one day, without the energy to see his wife Diana (Jennifer Garner), nor the enthusiasm to face the real world. So when following a racoon into his attic, directly across the road from his home, he absentmindedly spends the night. When he wakes up, rather than return home and find a way to explain his whereabouts the night before, he stays put – and eventually months pass, as he watches on as his wife and two daughters struggle to come to terms with his disappearance. He just watches from afar, eating out of bins and living in the shadows, watching his own life play out in front of him – just without him in it.

Though primarily a somewhat dark, profound tale that has a sadness running right the way through it, as we analyse this one man’s nervous breakdown, there’s an indelible wit prevalent throughout, deriving from Howard’s astute narration, with a comedic edge that plays heavily on the surrealism of the situation. Cranston epitomises this notion with a remarkable turn, playing unpredictable and unhinged with such conviction, as you believe in him as a regular guy going through a rather irregular time in his life, much like we see in Breaking Bad. He’s backed by a staggeringly impressive screenplay, which comes as little surprise given Swicord is behind it, managing to offer a heightened take on reality, and yet remaining so honest and observational at the same time.

There is something distinctly Hitchcockian about this endeavour too, and though perhaps it’s just that there are shades of Rear Window given Howard watches his family through a pair of binoculars, with an almost parallel narrative to his own, as their lives are documented – there’s the feeling of classic Hollywood to this film, and yet the overtly cinematic approach is spiked, persistently, by the sincere reminder that this could happen to any of us.