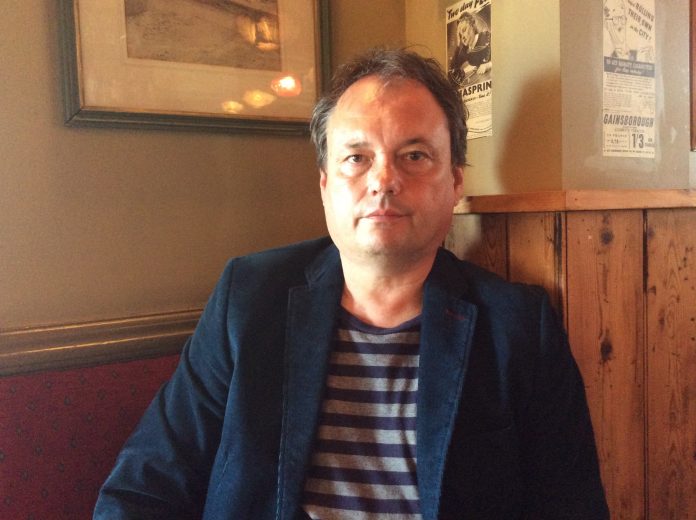 In 1995, the culturally significant football hooligan drama I.D. was released. Generating an ardent following and precious fan-base, the film had something to say, and though surrounding the fictitious Shadwell FC, the events that unravel hauntingly naturalistic. Now, over two decades later, a sequel is hitting our screens – and the paramount connection between the two films is screenwriter Vincent O’Connell, who returns for this second outing.

Though I.D. represents the writer’s most successful endeavour, when talking exclusively to HeyUGuys, O’Connell admitted that it took a number of years before he was able to appreciate the cult-favourite.

“I could never get over how people quote whole chunks of dialogue from the first film, still now, years on. It never stops amazing me,” he began. “People send me photos of tattoos with bits of the script they’ve got on their body. I’ve been in the pub before and no-one has known me from Adam, and loads of football supporters have started singing Shadwell songs.”

“But at the time I was very disappointed with how the film turned out,” he explained. “It took me a long time to adjust to it. I’ve always been excited by cinema that both shocked and amazed a crowd, but also has a serious artistic impact, and the films I really love are those that do both. That was always my intention with this, to get that paradoxical blend.”

“I.D. succeeded as a piece of popular entertainment, but didn’t didn’t quite deliver the artistic punches. I was speaking about the film in Exeter and explained why I had ambivalent feelings about it, and people were saying they loved the film and how much it meant to them, and that I should have more respect for it, and I was taken aback. That was 10 years ago and at that point I realised I had to readdress my relationship with this film. It may not be everything I wanted it to be, or turned how I imagined it to, but it has had some serious cultural impact and it does mean something to people, and I have to acknowledge that. That was the beginning of the possibility of me writing a sequel, because I had been asked before and I said no, but that’s when the little worm started wriggling around and I thought, maybe one day.”

One of the most prevalent themes within ID2: Shadwell Army – which now centres around an undercover cop called Mo (Simon Rivers) who seeks in exposing the head of the team’s hooligan firm – is how football has changed across the past two decades, and the impact that has had on the fans. That too helped plant the seed that allowed for this narrative to thrive off.

“My relationship with football has changed in the years since we made I.D. I used to be a complete fan and now I have a much more alienated relationship with the game, and realising that my altered relationship was similar to a lot of peoples, this was about something much bigger, this was about how a sense of community is less valued and it was about corporatisation and globalisation. How many people have you heard over the past few years say they can’t afford to get to games? Taking a kid to a game costs an unbelievable amount.”

“Recently we celebrated the 50th anniversary of winning the World Cup final, and people spoke about getting on the bus with Geoff Hurst. Well you don’t get on the bus with Wayne Rooney. People have investment in footballers in a different way, rather than getting on the bus or the train with them, they follow them on Instagram and Twitter and feel they still have some sort of contact. So there is disillusion and disenchantment. Just look at Hull, where we shot the film, the community club is falling apart at the seams. We’ve seen the rise of fan-generated movements like AFC Wimbledon and FC United and you had Liverpool fans leaving the ground early last year to protest ticket prices. So I realised there was a big story to tell about the game’s place within our communities, and in our lives, and how that’s changed.”

Though O’Connell represents the stand-out connection between the two films, he was thrilled that he was able to entice Lee Ross back into the project as Gumbo – who turned in an indelible performance in the original, and steals the show again this time round.

“Though I wanted to honour the first film, it’s about an undercover cop, it’s about football gangs and violence and it’s about personal identity, I didn’t want to do the same thing again,” he said. “There was an open offer to principle people from the last film, but it was so important that Gumbo had to be in it, I wouldn’t have done it without him. Gumbo is the living, breathing heart of I.D. and he had to come back.”

What helped to encourage O’Connell also, was a sense of closure, wanting to help lay to rest a sub-genre in British cinema he had helped to create.

“I.D. was the first film in the cinema about this, and then 500 films followed it, which I largely really loathe. They are mostly empty films. The reason I.D. had some success and some resonance is because it was about things. This whole crop of exploitation flicks that followed the film aren’t about something, they’re not about anything, not the ones I’ve seen. So I had this weird ambition, and I thought, well I’ve started this bloody genre, now I’m going to finish it with ID2 and take it to a place where you can’t come back.”

That being said, O’Connell admits that this isn’t a world he feels he can step away from easily – and much like the characters in the film, he’s been drawn into this culture, unable to simply remove himself, while also explaining how immersing himself in this world affected his own personality.

“You get method actors, well I’m a method writer, I immerse myself in material. When I was writing the original I.D., I got into scraps with people thinking, who am I? Why am I behaving like this, and picking a fight with a guy in the pub? That’s not me. I realised I had buried myself so much in this world I was walking around with it. Thankfully I got rid of it.”

“After I.D. I said I was never going to go back and I ended up writing ID2. The intention of writing this was to put an end to the football film genre I helped create. And here I am, sitting at a desk, which has got notes all over it for ID3, and not just that, but ID4 too. The juices are still flowing, and each film is a quantum leap from the one before. These guys won’t let me go. I’m Shadwell ’till I die.”

The future sequels to ID are not the only projects that O’Connell has underway, and the Brighton-based writer explains that one in particular has been causing must distress – and yet it’s one he’s desperate to get underway. It’s the story of Peter Rachman – a notorious landlord based in Notting Hill in the 1950s, and was originally set to be helmed by director Paul Marcus, before the talented filmmaker died five years ago. Alan Rickman then came on board as executive producer – before he also tragically passed away.

“With Rachman we’re regathering ourselves,” O’Connell, who will also be directing the feature, explained. “Alan Rickman was just such a fantastic help and guide to the film. It was a real shock to the system. Alan supported where we wanted to take it and what we wanted to do with it. To lose Alan was a terrible shock that we’re recovering from.”

“It’s been such a labour of love for such a long time that we’re gonna give it another good go. We have a new producer on board now. I’m still literally dreaming it, and for as long as that’s happening I know it’s alive for me. It’s been such a heartbreaking process, losing Paul. He brought the story to me years and years ago, and he showed me the bones of the Rachman story and I said, let’s do this. Then we got some development money to help move it on and we got the script together, with Paul to direct, and then he got ill. But that’s one of the things that keeps us going in the toughest of times with it, is wanting to honour Paul, and Alan’s commitment to the film, so we’re not giving up lightly.”

Needless to say there’s a long way to go yet before we may see this feature hit our screens, and O’Connell admitted that Brexit hasn’t helped matters either.

“It’s very difficult to make a film like this in the British film industry and it’s only going to get more difficult if Brexit goes ahead. It’s not a generic film. It was hard enough to make ID2 which has a proven audience. It’s been excruciating to get it off the ground, and that’s because we don’t have a serious filmmaking culture in this country.”

“Being a writer is a very hard job in a hard world,” he finished. “Unfortunately my great love is film and I’ve devoted most of my working life trying to create wonderful films and as I said earlier, I have too many unmade scripts sitting right in front of me at this very moment, boxes and boxes of them – I spend my life dreaming and creating and sometimes I think it’s for an industry that isn’t there anymore. I still haven’t given up on it and I don’t know why, you get a lot of heartbreak. But discontent keeps you going.”

ID2: SHADWELL ARMY IS IN CINEMAS AND ON DIGITAL FROM AUGUST 12, AND ON DVD/BLU-RAY FROM OCTOBER 3.

Win Eye in the Sky on DVD

Exclusive: Eye in the Sky director Gavin Hood on collaborating with the late Alan Rickman