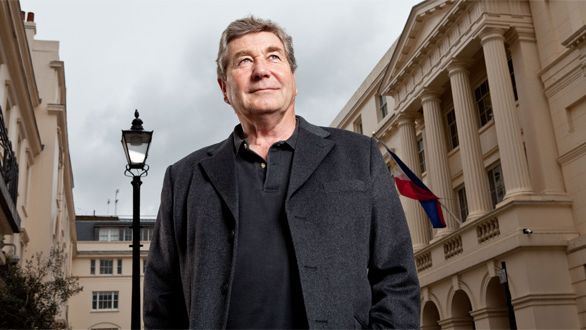 The 2016 Glasgow Film Festival has well and truly upped the ante with a schedule featuring such as titles as High-Rise and Demolition not to mention Hail, Caesar! Marquee films aside, there are special events that really give the festival that added oomph.

One such special event is a 35th Anniversary screening of Raiders of The Lost Ark at Kelvingrove Art Gallery and Museum with legendary stuntman, Vic Armstrong, in attendance to introduce the film he worked on as Harrison Ford’s stunt double.

With a career spanning 50 years and the only stuntman to have both a BAFTA and Academy Award, Vic Armstrong has cultivated a reputation of being the most prolific performers in his industry.

A Vic Armstrong: In Person event will also take place at the festival where he will discuss his career and more. We chat to the man himself in a two-part interview where we discuss about Raiders of the Lost Ark and more.

How do you think the Raiders of the Lost Ark action sequences stand up after all these years?

I think they stand up very very well. It’s a classic. I seriously think it’s ageless. I’ve looked at old movies I’ve did in the past and they do seem as though they’ve aged. I don’t think Raiders has because I think they got the mixture just right between computer graphics and live action. Good story telling and tremendous music has helped it stand the test of time.

What was the shoot like for you and what was hardest part of it?

It was physically tough. It was hot. We shot in Star Wars Canyon in 30 degrees every day. It was just blistering heat. We used to leave for work in three in the morning then finish at two in the afternoon.

It was just too hot to carry on. Everyone had stomach problems. You’re in the middle of nowhere and the hygiene was dreadful. We were all getting upset tummies yet all drinking bottled Evian water so couldn’t believe it.

Somebody followed one of the litter control guys and he was taking the empty bottles out the rubbish and filling them up again round the back! Speilberg wouldn’t eat anything unless he opened the can himself, it got that bad. He was terrified of getting sick.

Was there a sense on set you were making something special?

No. I would love to say I did. It wasn’t until I went to the Odeon at Leicester Square where we had a cast and crew screening, with the kids there and their friends.

Suddenly I realise the kids are standing on their seats shouting “C’mon Indy”.   I thought this could be a good little film. We never knew we were making a film that would turn out like it did.

Did you have to talk Harrison out of doing some of his own stunts?

No, not so much on the first one but on the later ones I did. Harrison did a huge amount of everything that was needed. Fight around the aeroplane and stuff like that. Quite honestly I am sure there were times he was like, “Shit, I think I’ll let Vic do the running”, it was so bloody hot during filming.

There was never much of a discussion about it because I think everyone was so exhausted we were quite happy to have someone to share the load with. On the last one, The Last Crusade, Indy is standing on this big rock and as the Arab goes by he jumps on him. It was the classic Indian jumping on the cowboy but now it’s the cowboy, Indy, jumping on an Arab.

It was either the day before or morning of the shoot, I am standing on top of the rock looking down and telling the boys where to put the sand for the horse and me to land on. I was aware of a figure behind me and a voice saying put it a bit further left.

I turn round and it’s Harrison. I said no, when I go down I am going to land over there. He said no, it’s going to go left. He said I am doing it anyway and I said no you’re not Harrison. It was a big jump of about 15 feet onto a horse that would then tip over onto the ground. I tried to talk him out of it, told him the horse could head butt you.

You could put your knee into your chin. You can hit the ground hard when you land, anything could happen. I said it’s a hat and a gun belt jumping down there – it makes no difference to you.

He wanted to do it. I said look Harrison, you’re earning plenty of money on this movie and I am doing reasonable well but you’re costing me a fortune on add-ons for stuff over and above the call of duty. You keep doing all the stunts and I get nothing. He said: “Shit man, I am sorry. Next time I am so ignorant kick me in the ass.” Just something that the odds weren’t right for and wasn’t worth it. You look at the movie and you can’t tell who it is.

What was the biggest near miss you’ve had?

We rehearse everything. Even jumping off the horse onto the tank I rehearsed that for two months before I did it. Funnily enough the worst injury I had in all of the films was just after they called cut on the final scene on The Last Crusade.

I stepped off the tank but my foot slipped and I fell forward against my knee so the whole weight of my body went against my knee. I tore my cruciate ligaments and everything and it still plays up today.

There’s talk of a fifth Indiana Jones film and even a Blade Runner sequel. Would you be open to returning to these films, maybe as a Second Unit or Action Unit Director?

I would return in that capacity because I am too old to be doubling for Harrison. He’s older than me but looks a million dollars. Yeah, I’d love to do it. I still think we did the best three, the first three. If the fifth goes back to basics, just like the new Star Wars, then you’ll have one heck of a film.

Blade Runner will translate into the 21st century better than Indiana Jones would. The first three were in an era where the movie business has changed. It’s a style of action that suited the 80s when we did it. I think Blade Runner would modernise because it is such a futuristic film. Ridley is one of the greatest directors and his vision would bring it a step forward. It is one of the greatest sci-fi films ever made.

One word always associated with you is prolific but are there any films you had to turn down because of how busy you were with other productions?

One I always regret on missing out on was The Fugitive. Harrison phoned me at home and asked me to do it and was going to do it. I then got offered Greystoke 2, the Tarzan film, to direct. I actually turned down The Fugitive but then things fell through.

I did turn down Terminator 2 but did actually end up working on that one by directing the opening sequence. The Fugitive was a really good film, classy and really watchable. I regret not having that on my resume.

Your photo with Harrison Ford on the set of Indiana Jones has become infamous. Have you still got the original?

Yep. It’s on my wall in my office. I have a wall with memories, friends and 8x10s [Laughs].

And where do you keep your BAFTA and Academy Award?

I’ve got those in my cinema, actually. I used to have a big saddle room but had too many, about 160 in total. I bought a projector when I was working on Gangs of New York from Michael Ballhaus, the DP.

I brought it home and it’s a little bit like having a button and then getting a suit made to fit the button. My wife suggested we change that room into a cinema. So I’ve got that with 7.1 THX sound and it’s really lovely. I’ve got my BAFTA and Academy Award in there with a few other awards.

Were you allowed to keep any of your props or costumes from the Indiana Jones films?

The hat, whip and shirt. My prized possessions. I keep those in my cinema as well.

Vic Armstrong: In Person tickets at the Glasgow Film Festival are available to purchase from here