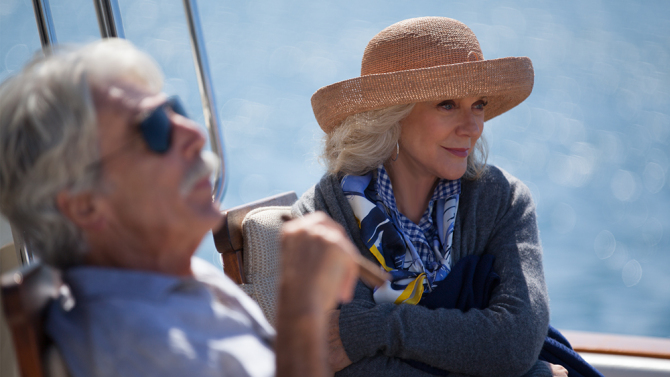 Though the title to Brett Haley’s sophomore feature film I’ll See You in My Dreams does give off the impression we’re dealing with a horror movie, or a thriller – thankfully, there is nothing horrific, nor thrilling, about this endeavour. Instead we have a charming, amiable and distinctly uncynical piece, that is light-hearted (at times to its detriment) and undemanding, in an appealing way.

Blythe Danner plays Carol Petersen, a former musician and widow, who is grieving yet again following the death of her closest companion, her pet dog. Spending her days at the local golf course, or meeting her friends for a game of cards, she is reluctant to start dating again – but finds a new lease of life when befriending the new pool cleaner, Lloyd (Martin Starr). Revitalising her and taking her back to her youth, she is ready to start seeing people, which happens to coincide with the introduction of Bill (Sam Elliott), who charms Carol, and allows her to discover that there is beauty in the world yet again.

Following on from the entertaining Lily Tomlin-starring Grandma, it’s encouraging to see another picture that has an ageing actress as the protagonist, and actually gives them a well-rounded personality, a sense of real humanity. She’s even sexualised to some extent, given at times we see her from Lloyd’s perspective, and while their relationship is purely platonic, we grow to appreciate her needs and desires. Amongst friends she discusses sex, relationships, they drink wine and smoke marijuana, and it’s refreshing to see. Plus, June Squibb stoned is nothing short of remarkable.

If you were to outline this narrative to somebody you would imagine it to veer into the realm of the melodrama given how much our protagonist is put through, but Haley manages to avoid that, remaining subtle in parts and is never overtly theatrical. While this is by no means a pity fest, we do form a close emotional bond with Carol, thanks to Danner’s endearing, sincere performance that ensures you’re on her side from the offset. She’s vulnerable but never to a point of being a victim, she’s still empowering and admirable.

Nonetheless, the picture does shoot itself in the foot during the latter stages, becoming needlessly saccharine in parts, and undoing much of the good work in the process. The film is touching, and warm and earnest in its conviction – but there’s a few too many mawkish tendencies that are frustratingly implemented for no good reason, and turn what could be a great movie, into something rather average.