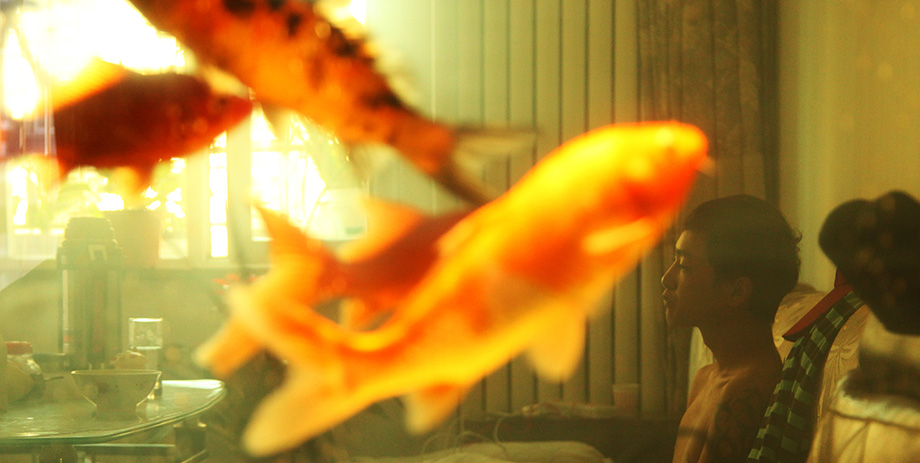 Award-winning director Wang Xiaoshuai disembarks in Venice with another potential prize winner in his lead actress in Red Amnesia.

Deng (Lu Zhong) is an elderly woman living in Beijing. Recently widowed, she spends her days trudging around the city from one family member to another. She visits her aged mother in an old people’s home, her wealthy son in his family home and her other son and his gay partner in their slightly dodgy massage parlour, cooking and feeding them while showing her disapproval to all. At home, she sets the table for two, and chats to the ghost of her dead husband. Yet this is not the only ghost: Deng is haunted by mysterious phone calls. Who would threaten this little old lady? A clue is given in the opening scene (and in the title). Zooming in on some photos, we see the young Deng and her husband in uniform, and later we learn that perhaps this woman’s past has come back to trouble her. After the calls, the director cuts to shots of a young tattooed man, never completely seen, and in one scene we see him in an apartment, the body of a man at his feet. What does this boy want with Deng? And when Deng unwittingly befriends him, we fear that she has met her nemesis, Wang Xiaoshuai creating terrifying and disturbing dream sequences and imaginary scenarios involving Deng’s bloody murder.

In one scene we see Deng enter a community centre where a choir is singing an old Maoist hymn. She finds the song unbearable and swiftly leaves. Yet when she grasps who her mystery caller might be – the ghost of a man she cheated and denounced many years earlier while in exile – she returns to the choir practice and remains transfixed in the doorway. Having reached this metaphorical threshold, Deng is ready to confront her past and her demons, returning to the remote province where she worked in the factories. When Deng arrives there, we have to see whether she can redeem herself and finally be forgiven for her previous actions.

I would have preferred a more ambiguous ending, but this is an accomplished and thought-provoking film, reminding viewers that behind China’s economic boom lies a barely-hidden and harrowing past. Wang Xiaoshuai has created an interesting amalgam of a movie that works on various levels. It is a family saga that looks at generational problems, a thriller, a historical investigation of China’s past – the director conjuring up the ghost of Maoist China as we wander around these derelict factory buildings, listening to the erstwhile workers and seeing their current living conditions – and a sociological look at contemporary China. And in Lu Zhong we surely have the only contender for Best Actress, echoing Deanie Ip’s for her own knock-out performance as an elderly servant in A Simple Life.