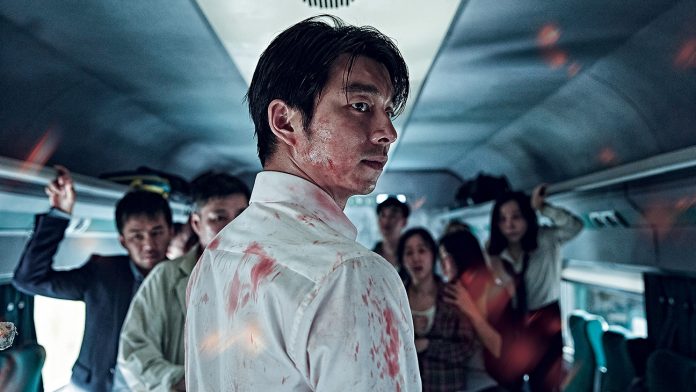 How do you reinvigorate the over-crowded zombie-apocalypse genre? Sticking the undead on a high-speed train is Yeon Sang-ho’s answer and this contained premise delivers fiercely kinetic, breathlessly entertaining results. Train to Busan is a complete blast from start to finish and is undoubtedly one of the most delightfully unique zombie films in years.

Refreshingly, Sang-ho doesn’t waste any time over-explaining the origin of the zombie outbreak. In Seoul, a truck driver flattens a deer in an area that’s been quarantined due to a chemical spillage. The roadkill quickly jerks back to its feet with a hellish look in its eyes and just like that a pandemic begins. The central characters are given a pretty economical set-up too as we’re swiftly introduced to neglectful hedge-fund manager Seok-woo (Gong Yoo) and his cute pre-teen daughter Soo-an (Kim Su-an). After Seok-woo messes up Soo-an’s present, he takes her on a birthday trip to see her mother in Busan instead.

Their train leaves Seoul just as the city is plunged into chaos and martial law is declared, but not before one savage-looking female passenger leaps aboard. As the infected woman begins to transform, Sang-ho deftly introduces us to the other characters. They include a pregnant woman (Jung Yu-mi) and her attentive husband Sang Hwa (Ma Dong-seok), a baseball team and a girl (Ahn So-hee) who fancies one of the players, a self-centred businessman (Kim Eui-sung), two elderly sisters and a murmuring homeless man (Choi Gwi-hwa).

Although Seok-woo’s character development from narcissist to selfless hero is a rather familiar path, Sang-ho’s focus on small, separated pockets of character interaction imbues these relationships with a real believability and affection; you genuinely start to care for this group of unlucky commuters.  As the zombies run riot throughout the carriages and the train heads for a safe zone in Busan, the characters are picked off with a shocking unpredictability which endows each death with a real emotional punch.

The film’s action sequences are masterfully staged by Sang-ho and he uses the different spaces of the train imaginatively to build and dissipate tension as well as create an unsettling mood of claustrophobia. Lee Dong-ha’s energetic cinematography captures the action with real vigour and the nimble movement of his camera assists in generating a frenzied, violent atmosphere.

It helps that the zombies are also properly terrifying, rabid-eyed, blood-thirsty animals whose frightening speed would give Usain Bolt a run for his money. The scale of one attack, involving an enormous group of zombified army soldiers, is utterly jaw-dropping and it’s one of the most impressive, thrilling spectacles you’re likely to see on-screen this year.

The film isn’t afraid to laugh at its own ridiculousness either, and the over-the-top zombie carnage is deftly underscored with humour. The group’s desperate fight for survival also throws up some perceptive class commentary and explores some of the darkest sides of human nature.

Events end on a highly-poignant note which some may find melodramatic, but in a film of such insane extremes it seems suitably fitting. Train to Busan sets itself apart from typical lacklustre zombie fare with a cleverly-focused plot, blistering momentum and superbly choreographed set pieces.

Train to Busan to get the VR treatment

The Comedian’s Guide to Survival Review

Train to Busan and The Greatest Foreign Horror Movies