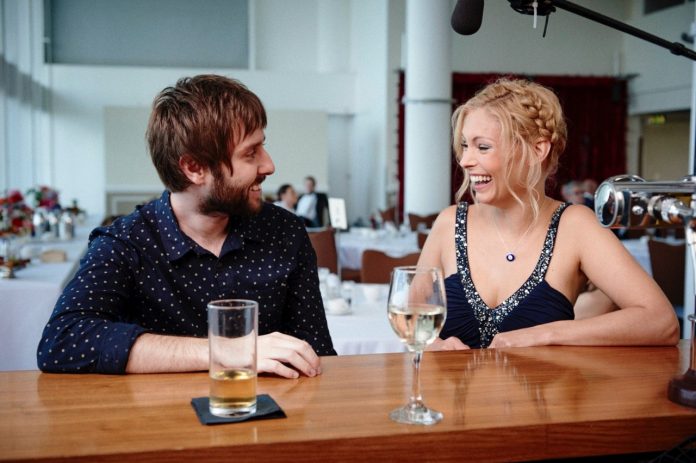 The Comedian’s Guide To Survival is a film that wants to connect the audience to the on-stage performer so much that its protagonist spends a majority of the film talking directly to us, and sometimes other characters steal the spotlight too, but for all its wants for us to know what it is like on stage, in the spotlight, hearing the roar of a crowd, the film’s fatal flaw is not getting any sense of the feeling of being up there. The want, the need for a crowd of strangers to laugh at you, the ecstasy of landing a successful joke, or the fear of silence when a punchline drops like a lead balloon.

James Buckley from The Inbetweeners brings his intense and sardonic style to the lead role, playing journalist and part-time stand-up James Mullinger, who wrote the script with director Mark Murphy and appears later in the film as a ‘handsome, successful, hot as hell A-List comic performer’ in a moment that perfectly encapsulates the entire film. It’s not a film about comedy, the craft, the love, but about one man and his ego, and the mistake in not portraying him as something of an anti-hero.

For the road James travels in the film, as a journalist who wants to do comedy and fails, and takes his article writing on the road to interview comedians (Hello Omid Djalili and Gilbert Gottfried among the real people who discuss craft), is meant to be a look at a man with dreams and aspirations, and nothing will stop him. It comes off like a smug git with no sense of the world around him hurting everyone else for a dream he doesn’t really care about. The film doesn’t know how to make it seem like a dream we should invest in, until the film’s disappointing final sequence which is less Bender raising his fist in The Breakfast Club and more Jason Statham raising his middle finger to the camera at the end of Crank 2.

The Comedian’s Guide To Survival is no Funny People, a film that, whilst seemingly endless and tangential, eternally understood the love and neediness of performers, the art of stand-up, and the euphoria of the stage. This film is a tired piece of work that has its head up its own person. A film about comedy that has no laughs, and not for lack of trying, is a sad existence. Best guide to survival? Avoidance, at all costs.

Win The Comedian’s Guide to Survival on DVD