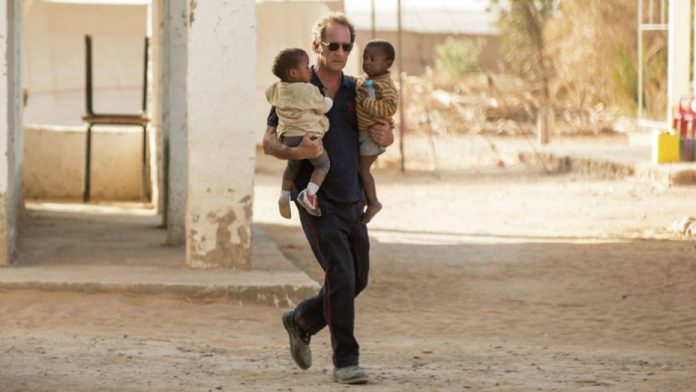 Joachim Lafosse’s The White Knights is a semi-fictitious account of charity Zoe’s Ark, and their endeavour to smuggle over a hundred orphans from Chad and take them to adoptive parents back in France. Setting the lead roles up as antagonists of sorts, appearing almost as a covert mission to steal children, you can’t help but feel uncomfortable and anxious, until you witness the environment these kids are growing up in, and you hear the volunteers outline their intentions. Suddenly you grow somewhat sympathetic and endeared to their cause – but that’s far from a lasting sentiment. For what transpires is a feature that blurs the line between right and wrong, creating an internal conflict that makes for a hugely provocative production.

The ringleader, Jacques (Vincent Lindon) is determined to see this through to the bitter end, in spite of the growing concerns from those around him. Laura (Louise Bourgoin) and Xavier (Reda Kateb) remain committed, but the odds stack up against them as they struggle to determine whether or not the children they are vying to protect are indeed orphans, or whether they are the product of parents and local chiefs attempting to swindle some money in exchange.

Playing heavily on our moral compass, you are able to empathise with the cause, all while aware that their desired path of action is distinctly unethical. They have their best intentions at heart, but are not going about this in the correct and proper manner. It’s a very murky subject and makes you think, and question yourself – which is the sign of a good movie. It helps that the protagonists are so flawed, as we see their darker sides, crafting more human creations – and none more so than Jacques, and it’s a role that Lindon thrives in. The actor carries a unique ability to be so warm in parts, but cold and unforgiving in others.

Meanwhile Lafosse implements a technique whereby he takes something of a backseat, as though he just leaves the camera and lets it film, lingering from afar, not only adding to the naturalistic elements, but ensuring he remains impartial. It’s a technique similar to that used by Tobias Lindholm in A War – another film that creates a conflict within the viewer – it aids the auteur’s sense of impartiality, as he becomes something a voyeur. In many respects he embodies the character of Francoise (Valérie Donzelli), a journalist chronicling the charity’s moves with her handheld camera, merely peeking in, taking no sides and documenting the entire situation.

The realism extends to the group dynamic, as it’s not all sunshine and happiness within the camp, there are many arguments and confrontations, and they appear to be as emotionally exhausted as we are. A huge matter of debate is how their inclination to pay the chiefs for orphans, which makes the latter something of a commodity, encouraging lies from the sellers, with an eye on a good financial deal for themselves. The charity are bringing money to the third world, and the expression ‘opening up a can of worms’ springs to mind, no matter their earnest intentions. “This money is for the village, not for the children” Jacques insists when handing over a package – but it’s not really his call.

Following on from his remarkable dramas Our Children and After Love, Lafosse has once again studied humanity in a nuanced manner and to profound consequences. So much so, that we can (just about) excuse what is arguably one of the worst English accents you’ll hear for a good long while, belonging to one of the local law enforcers. It puts Dick Van Dyke to shame.