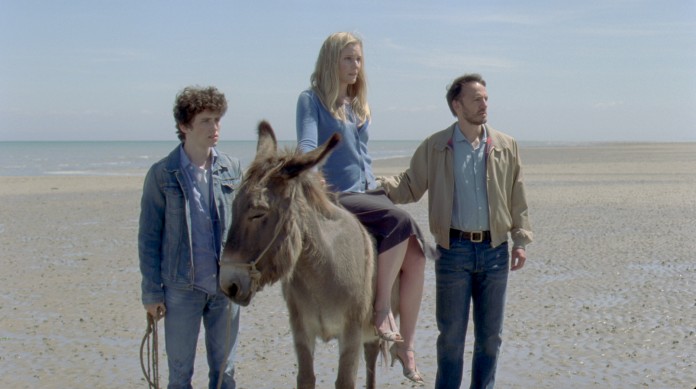 For the resourceful, idiosyncratic auteur Eugéne Green, his latest endeavour The Son of Joseph marks what could be considered his most mainstream production yet, at least by his standards. This meticulously crafted, faintly jocular piece begins in a rather uneasy manner, however, as we watch on as two teenage boys prod a caged rat, wondering about the best, most torturous way to kill the innocent animal – but this sequence could not be more at odds with what transpires, as a comedically inclined, quirky feature that will keep you smiling right up until the bitter end.

Awkward teenager Vincent (Victor Ezenfis) wants nothing more than to learn of the identity of his father, and though consistently quizzing his mother on the subject, Marie (Natacha Régnier) remains tight-lipped, with the same answer given every time, ‘you have no father’. So the youngster takes it upon himself, and after some investigative work, discovers that he is the son of the affluent, self-serving publisher Oscar Pormenor (Mathieu Amalric). After getting to know this narcissistic, callous individual, Vincent decides this is not the man he wants to be his father – and so decides to befriend the publisher’s far more endearing brother Joseph (Fabrizio Rongione), instead.

Green presents this narrative in a unique way, akin to the likes of Napoleon Dynamite, particularly in how the characters converse with one another, as it’s so stilted and formal. They stand three feet apart with their arms motionless by their side, adding a touch of surrealism to proceedings. Perhaps, like Napoleon Dynamite, this approach is taken as we have embodied an awkward teenager, and so adopt his outlook on life, where conversations do feel like this. This notion is enhanced as we even follow his gaze in parts, as Green leaves his camera to linger on people’s legs and feet as they walk, pointing towards a curious character, just watching and absorbing what’s around him.

In spite of the overstated, insincere nature of the dialogue, underneath this facade lies a remarkably human tale, as to contradict the comedic tone, we’re dealing with a moving, common tale of a teenage boy struggling to find his way in life without a father figure and male role model in this life. Green must be commended for ensuring that his light take on this narrative never once compromises the pathos and poignancy of the piece, and the messages being portrayed.

It’s these messages, mostly told through biblical references and art (the collaboration between the latter and his film a staple in Green’s career) which lay the foundations for this production. Though contrived in their implementation, they point towards a film that has been scrupulously well-crafted, and while this may affront as a whimsical, jovial piece – what lies beneath is an intelligent and profound piece of cinema.