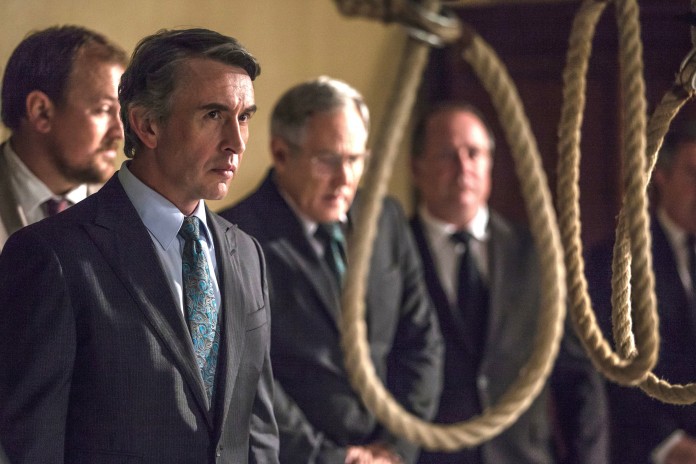 It’s seldom seen to step foot into the courtroom in a cinematic endeavour, without any sense of ambiguity as to whether the defendant is guilty, or not guilty. But Oliver Schmitz’s Shepherds and Butchers is a unique picture that hinges instead on the extent of the sentence, and whether or not he will be punished with death.

Based on a real, momentous case in the late 80s in South Africa, we meet the jaded defence lawyer Johan Webber (Steve Coogan), tasked with a seemingly hopeless case, resigned – alongside his colleague – to failing spectacularly. The defendant is Leon Labuschagne (Garion Dowds) who murdered seven people in cold blood, with all of the evidence stacked up against him. But when Webber learns that Labuschagne had been working on death row, and present for a record number of executions the preceding year, he looks to use traumatisation as a key component in his case, as a means also of highlighting the sheer barbarity of the capital punishment system. But even then it will take a lot to convince the judge (Marcel van Heerden) to be lenient as a result, made harder when up against the accomplished lawyer Kathleen Marais (Andrea Riseborough) who is on hand to not only protect the victims and their bereaved families, but the state.

Schmitz doesn’t pull any punches with this hard-hitting, disquieting piece of cinema, beginning as he means to carry on as we witness the crime in the opening scene. Films of this nature could easily surpass the two hour mark, complete with superfluous back-story, but we dive right in, learning about the character’s histories through flashbacks that derive from the court-case instead. Sadly, however, the visual experience is lacking somewhat, as the director’s vision is cheapened by the cinematography, as a film that is far too televisual in its aesthetic.

The music enriches this tale however, and vitally, it’s implemented sparingly, ensuring this is by no means a manipulative piece, as instead we rely on the narrative and dialogue to evoke emotion. It’s dialogue that has been brought to life emphatically by Coogan too, impressing, again, as a dramatic performer, proving there’s so much more to his demeanour outside the North Norfolk region. There’s even a subtlety to his accent, as he resists veering into the realm of a caricature, which can be done so easily with such distinctive intonation.

His performance is not matched, however, by Dowds, who hasn’t quite got that streak of volatility and unpredictability about him which hinders our investment in the tale. He plays the role with a little too much fragility, and as such we struggle to comprehend the savagery of that fateful night. Though the viewer is firmly on the side of Webber’s cause, appreciative that this young man has suffered irrevocable psychological damage, we still have to believe he was capable of murdering seven people.

This leads in to one of the film’s greatest flaws – as when Webber’s co-council rants about how nobody ever remembers the victims of these cases, with all of the attention placed purely on the perpetrator, it’s sadly a notion that Schmitz is guilty of himself, as we don’t get to know any of those who had been killed on that tragic night – and adding that in to the mix would equate to a more emotionally rich experience for the viewer.

‘Matilda’ adaptation to get a December 2022 release