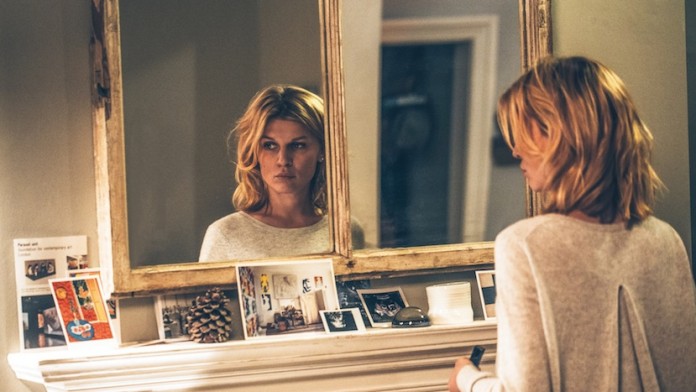 When it comes to the horror genre, there’s a general feeling that to evoke fear from the viewer, there needs to be a touch of supernaturalism to proceedings, to use archetypal antagonists such as ghosts, aliens or zombies as a means of petrifying those indulging in the project. But reality can be a far more menacing prospect, and David Farr has tapped into exceedingly relatable, primal fears in his debut feature film The Ones Below – playing on the notion of our offspring being in danger, while using a new born’s immense fragility as a means of extracting a distinct anxiety out of us.

Kate (Clémence Poésy) and Justin (Stephen Campbell Moore) are expecting their first child, and are excited about the prospect of their unborn child having a potential friend, given their new neighbours downstairs, Teresa (Laura Birn) and high-flying businessman Jon (David Morrissey) are also nearing the end of the former’s pregnancy. However any such curiosity into their new neighbours soon turns to trepidation, after Kate and Justin host the couple for a dinner party – where certain events occur that not only fracture the relationship between the households, but also threatens the safety of the child Kate is carrying.

Kate makes for an intriguing, unreliable entry point into this world, as we adopt that emotional vulnerability and volatility to her demeanour, always unsure as to whether she and her newborn son are subject to psychological abuse from new neighbours, or if it’s merely in her head. It’s this inability to judge the situation that defines this endeavour, as we fail to determine whether this is merely paranoia, or in fact if these are side-effects of antenatal depression, again allowing Farr to implement very real human emotions as a means of exploring and displaying traditional tropes of the horror genre – similarly, for example, in how The Babadook approached the theme of grief, using the delicate state of mind as a catalyst for archetypal horror devices.

Farr does an impressive job establishing the tone of the piece too, mostly through the indelible score. Setting itself up as a family drama of sorts, there’s little to find disquieting, for all that we are witnessing are a couple preparing for the birth of a new child. But given the chilling soundtrack it ensures we’re forever on edge, proving just how pivotal the music can be in determining and informing the atmosphere of the project at hand.

However for all of the positives on show, this film falls apart in two vital, requisite areas; the hackneyed screenplay and below-par acting. Though undoubtedly a disquieting endeavour, that is compromised greatly by the lack of character development, with three underwritten roles circling around the only significant character in Kate. Though primarily her story, had the other three been somewhat more well-crafted and fully rounded, the film would have benefited greatly as a result.

Tenet Trailer Breakdown – What We Know So Far