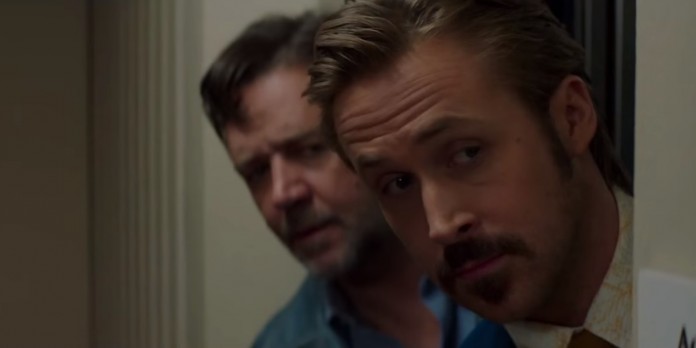 A pioneer of the action genre – having penned the screenplays for seminal endeavours ranging from Lethal Weapon, The Last Boy Scout, and The Long Kiss Goodnight – Shane Black is something of an elusive presence in the director’s chair, with just two credits to his name in Kiss Kiss Bang Bang and Iron Man 3. His latest endeavour, the alluring, nostalgia-infused comedy The Nice Guys, ensures it’s three out of three for the immensely talented filmmaker.

Set amidst the seedy underbelly of 70s Los Angeles, we meet Jackson Healy (Russell Crowe), a seemingly infallible, apathetic fixer, who navigates his way around town, undertaking violent jobs for whoever pays him handsomely enough. His latest victim is single father and private eye Holland March (Ryan Gosling), yet despite getting off on the wrong side of the former’s brass knuckles, the pair have a common interest; Amelia (Margaret Quailey), who has seemingly been caught up in the murder of adult porn actress Misty Mountains. The clumsy duo are being paid by the young hippie’s mother, and chief of justice, Judith Kuttner (Kim Basinger), who wants her missing daughter back – but as the clumsy pair dig deeper into this tale, the harder it is to get to the truth. Thankfully, however, March’s teenage daughter Holly (Angourie Rice) is on hand to ensure things to run to plan. Just.

With a pulsating, slick screenplay to match the indelible aesthetic, where The Nice Guys thrives is within its captivating narrative. Often features with a real commitment to the style can often compromise on the substance, but not in this instance, for a compelling detective story remains at the heartbeat of the feature. This is by no means a case of the affectionately overstated, and overt grandiosity papering over any cracks, for Black and co-writer Anthony Bagarozzi have meticulously crafted a simply electrifying endeavour.

It’s the small, seemingly insignificant details that make this, particularly when portraying just how endearingly clumsy the leading pair are – such as when March asks for a mint, and proceeds to pick up a handful and get the majority on the floor as he vies to put them in his mouth – a moment never referred to, but vital in its inclusion in creating full-bodied characters we can invest in. Talking of which, the young Australian actress Rice steals the show, representing the more level headed character amongst the collective, despite being at least half the age of anybody else she encounters.

The Nice Guys offers pure entertainment, and while Black last showed off his directing chops in the MCU – it just goes to show that you don’t need to have supernatural abilities and monumental stakes to provide an engaging, unrelenting cinematic experience. That being said, the narrative does become rather convoluted and needlessly complex in parts, as this labyrinthine story can be somewhat inaccessible at times – but it takes little away from a film that sets out to entertain, and does so tremendously.